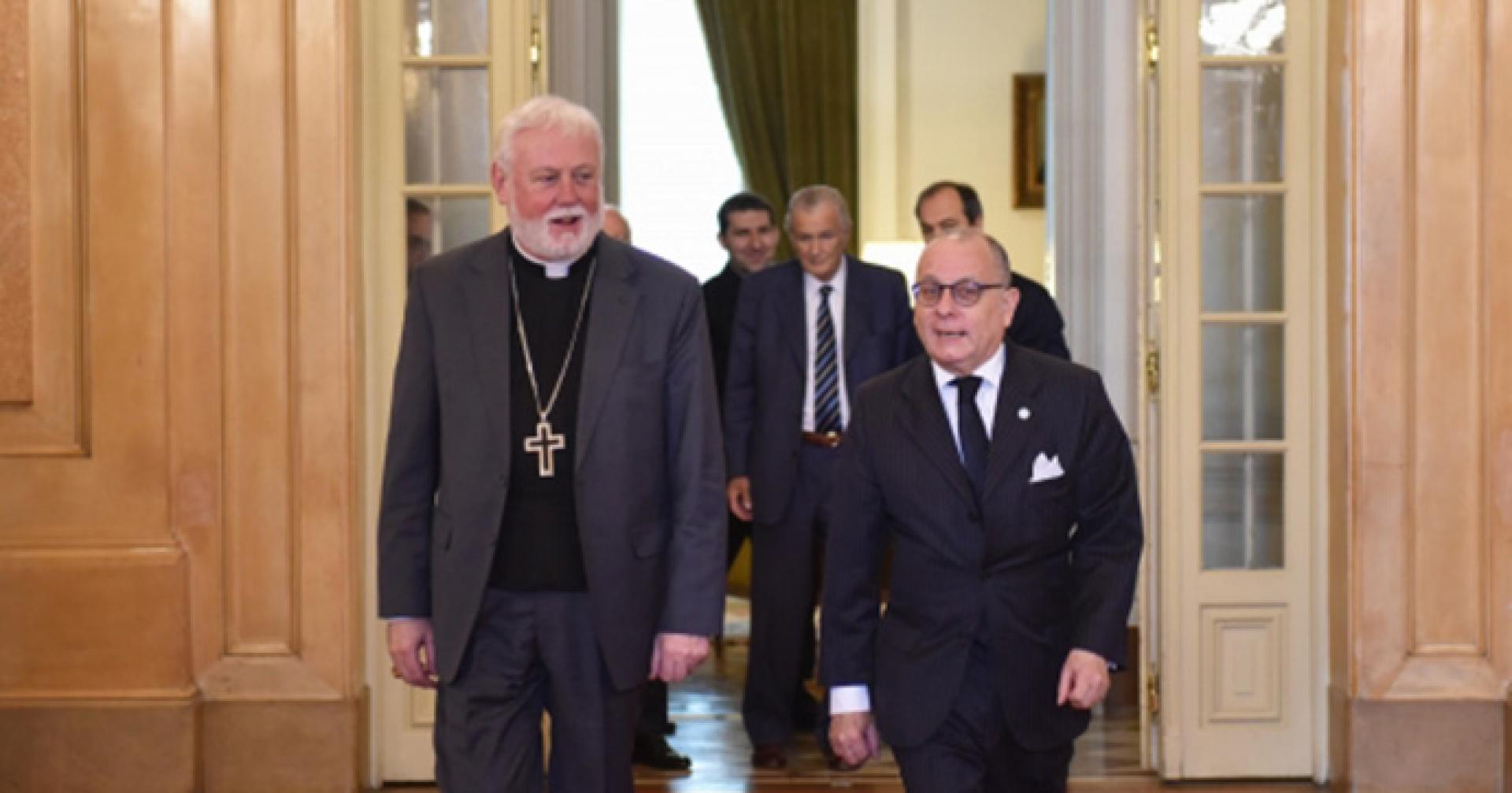 Visit by the secretary for relations with states of the Holy See, monsignor P. R. Gallagher

The visit by the "Foreign Minister of the Vatican" (the Secretary for Relations with States) strengthens the relationship between the Holy See and Argentina and reaffirms shared interests based on common ideals, values and goals.

On the first day of their stay in Argentina, the Vatican representatives were received at the official Presidential Residence in Olivos by President Mauricio Macri, Foreign Minister Jorge Faurie, the Secretary for Strategic Affairs, Fulvio Pompeo, the Secretary for Worship, Santiago de Estrada, and the Ambassador to the Holy See, Rogelio Pfirter.  The meeting was also attended by the Apostolic nuncio, Monsignor Paul Emil Tscherrig.

During the meeting, President Macri presented the general guidelines of his administration and addressed Monsignor Gallagher's queries in a friendly and informal conversation. The guests were then received by Foreign Minister Faurie at the Foreign Ministry and held a meeting to address the position of Argentina and the Holy See regarding international issues, especially with respect to Latin America. Monsignor Paul Gallagher is aware of developments, as his long career has taken him to all five continents and he lived in Guatemala for some time, among other countries. He is aware of the needs of the least developed countries, since he has also lived in Burundi, Tanzania and the Philippines.

Foreign Minister Faurie then held a working lunch which was also attended by the President Pro Tempore of the Senate, Federico Pinedo, the Ministers of Labour and Social Development, Jorge Triaca and Carolina Stanley, and the members of the Executive Committee of the Argentine Episcopal Conference, headed by its President, Monsignor José María Arancedo.

On Sunday 5 November, Monsignor Gallagher celebrated Mass at the Buenos Aires Metropolitan Cathedral, with several Argentine authorities present. Monsignor Gallagher was joined by the Archbishop of Buenos Aires, Cardinal Poli, the Apostolic nuncio and several bishops. The Apostolic nuncio, P. Tscherrig, later held a lunch meeting which was attended by the Executive Committee of the Argentine Episcopal Conference, the Secretary and the Undersecretary for Worship, the Ambassador to the Holy See and the Secretary of the Apostolic Nunciature.

On Monday 6 November, the Vatican representatives held an extensive meeting with the Chief of Cabinet of Ministers, Marcos Peña, at which they talked about the actions of the Argentine Government and Monsignor Gallagher was able to ask questions, after which he stated his satisfaction at the information received. Finally, an official dinner was held in Pilar after the opening meeting of the Plenary Assembly of the Argentine Episcopal Conference, at which Monsignor Gallagher also participated.

Monsignor Gallagher sees diplomacy as a necessary tool in seeking peace and harmony among nations, and his visit reaffirms the excellent bilateral relations and cooperation between Argentina and the Holy See, as well as the shared views and goals regarding several issues of common interest.  We believe that the good relationship with the Vatican City State will allow us to continue developing a common agenda to strengthen dialogue with fruitful outcomes for both parties.

Before leaving Argentina, the delegation of the Holy See expressed its appreciation and underscored Argentina's hospitality, while stating that they had gathered detailed information for the Holy Father.