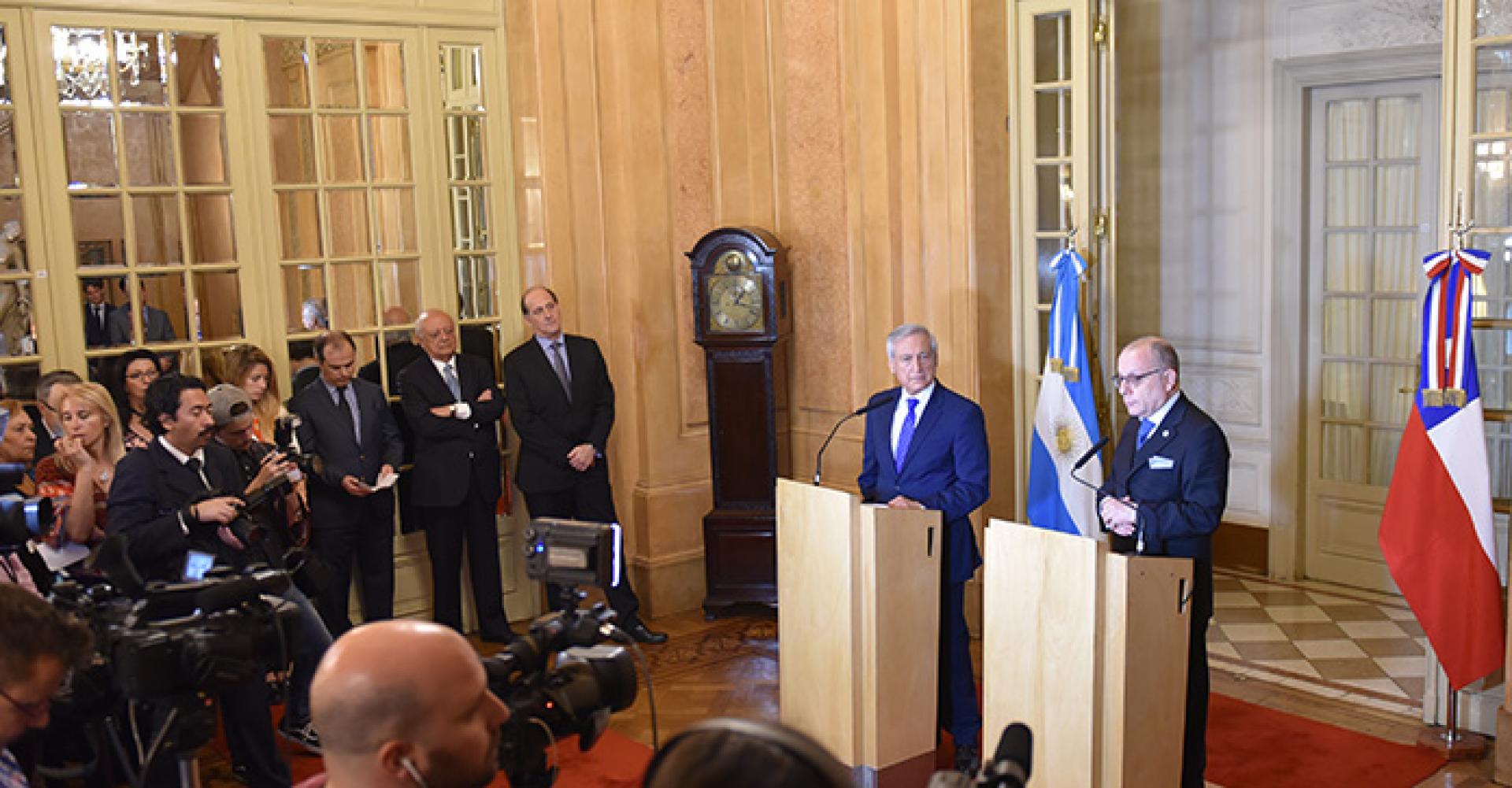 Chile is the first Pacific Alliance country with which Argentina has negotiated cutting-edge agreements. Both countries proposed new commitments intended to strengthen the legal instruments that currently govern their trade relationship, as well as to expand it in various areas such as Investment, Services, Government Procurement, Telecommunications and E-commerce, Environment, and Labour Relations.

On 2 November, Argentine Foreign Minister Jorge Faurie and his Chilean counterpart, Heraldo Muñoz, signed two bilateral agreements which marked the culmination of the decisions made almost a year before, following the December 2016 presidential meeting, which had also been attended by the heads of all Argentine and Chilean Ministries. On that occasion, both sides negotiated an ambitious trade liberalization agreement which addressed new issues arising from technological changes in recent years, as well as procedures to update existing trade and dialogue mechanisms. Accordingly, the new agreements have taken into account rules set forth in prior bilateral agreements, as well as in economic complementarity agreements between Chile and Mercosur.

Chile is a strategic trade partner for Argentina, in view of the USD 1.6 billion trade surplus, the highest in the Americas. The composition of Argentine exports is also a qualitatively important factor, given that the country primarily exports industrial and high value-added goods. Furthermore, Argentina's trans-Andean partner is one of the main sources of Foreign Direct Investment (FDI) in the Americas and the 5th largest investor in Argentina. Chile invests approximately USD 10 billion around the world annually and, in the past two years, it has announced investment projects in Argentina (in the retail, food, beverage and mining sectors) which are expected to be carried out soon.

For that reason, among the many issues addressed, special attention was devoted to updating investment rules. The Agreement on Reciprocal Investment Protection between Argentina and Chile, signed in 1991, was replaced by a modern instrument which provides enhanced legal certainty for both States and investors: it not only reaffirms the right of States to regulate, but also sets a high level of protection for investors from the other country.

Three main new issues were addressed during the negotiations: Firstly, a considerable proportion of trade in services was liberalized, thereby creating opportunities such as the rendering of professional services to Chile, whose global service imports amount to USD 13.5 billion. Secondly, Argentina has for the first time reached an agreement on e-commerce which includes an overall regulatory framework and provisions on mutual recognition of digital signatures, online consumer protection and personal data privacy. Finally, among several other issues, both sides reached an agreement to eliminate the additional cost of roaming services for Chilean and Argentine citizens travelling to the other country. It will be applicable within a year from its date of entry into force and includes the transmission costs of text messages, calls and data.

The set of rules included in the agreements signed also addressed other important matters, as illustrated by the chapters dedicated to regulating the effects of trade on work and the environment. The commitments undertaken include cooperation mechanisms to prevent the parties from promoting trade by capitalizing on advantages derived from lowering environmental and labour standards. In this regard, provisions intended to safeguard the interests of SMEs and address their specific concerns were also included.

The signature of the agreements was the result of the political decision made by Presidents Macri and Bachelet to strengthen bilateral integration, and supplements and completes a series of agreements between Argentina and Chile. This is the reason why such agreements were reached in a relatively short period of time, following five rounds of intensive negotiations conducted over a year. Foreign Minister Faurie noted that "the agreement revamps our bilateral relationship and our trade". Its importance is such that Chilean Foreign Minister Heraldo Muñoz stated, on the occasion of its signature, that: "The agreement we have signed today marks a milestone. We have achieved substantive and real, rather than rhetorical, progress in bilateral integration."

These instruments seek to create the conditions to boost bilateral trade and reciprocal investment, to create new opportunities for trade in services and e-commerce to be seized by the business communities of both countries, and to offer concrete benefits for Argentine and Chilean citizens travelling to the other country.