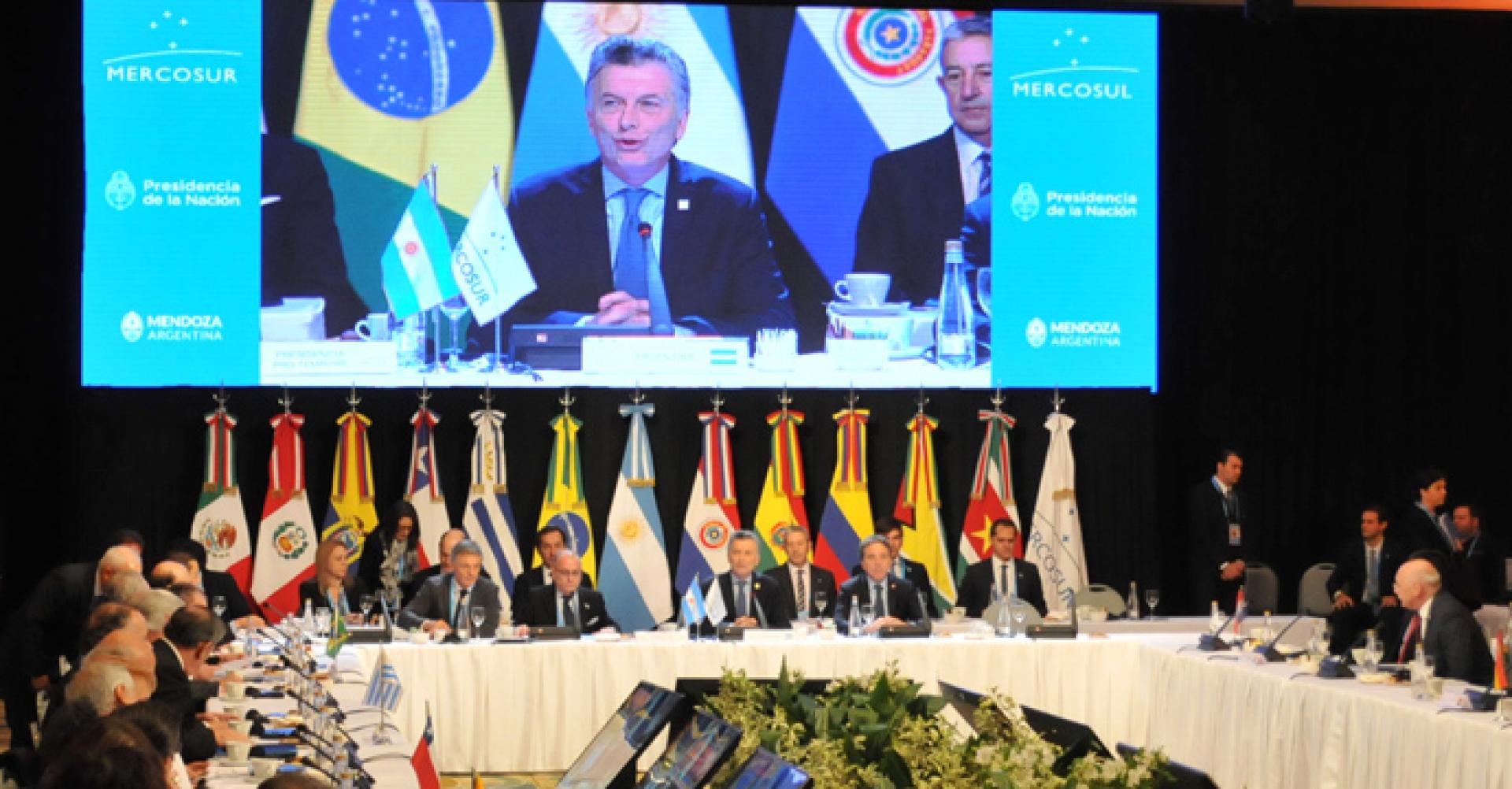 Summit of Presidents of MERCOSUR Member and Associate States

On 21 July, the MERCOSUR Summit was held in Mendoza and confirmed the full force and importance of the integration process that began with the Treaty of Asunción in 1991. MERCOSUR is Argentina's main instrument for international insertion, and, as such, its development is reflective of the Government's drive to ensure Argentina's smart integration with the world.

The meeting was attended by the Heads of State of six countries (Argentina, Brazil, Paraguay, Uruguay, Chile and Bolivia) and by representatives of Colombia, Ecuador, Guyana, Peru and Mexico. Special guests included the President of PARLASUR and authorities of the IDB, the Development Bank of Latin America (CAF), ECLAC, FAO and the Plata Basin Financial Development Fund (FONPLATA).

Holding this meeting in Mendoza also served as an opportunity to continue with the federal policy of affording all provinces active participation in all major events that set the course for our country's future.

The Mendoza Summit marked the end of the Argentine Presidency Pro Tempore, during which MERCOSUR members went back to pursuing coordination of interests and projects that resulted in agreements and decisions on the next steps in our regional integration process. MERCOSUR has thus recovered its dynamism, both with respect to its own internal operation and as regards its international participation, through external negotiations.

In brief, during the first half of this year, the Agreement on Intra-MERCOSUR Investment Promotion and Facilitation was signed, progress was made on the draft Agreement on Government Procurement, the agreement to remove many of the barriers still affecting intra-zone trade, and progress was also made on the works funded by FOCEM (MERCOSUR Structural Convergence Fund).

Renewed impetus on the international front has led MERCOSUR to initiate and resume negotiations and exploratory dialogues with several countries and regional organizations, among which we highlight negotiations with the European Union, the Pacific Alliance and several ALADI member states.

As regards political, social and citizen issues, the Mendoza Summit served as an opportunity to highlight some of the most recent agreements at a regional level, such as the Agreement on consular assistance and protection between MERCOSUR Member and Associate States, the Agreement on Security Information Exchange, the 2016-2020 Plan of Action on Education and the Strategic Action Plan.

The Presidents were also able to hold bilateral meetings and reach agreements on items pertaining to the international agenda. In this regard, they agreed on declarations regarding the 2030 Agenda for Sustainable Development, the Paris Agreement, illegal, unreported and unregulated fishing, the upcoming WTO Ministerial Conference and the situation in Venezuela.

In addition, during the Mendoza Summit, new Cooperation Agreements were signed with the Food and Agriculture Organization, the Development Bank of Latin America, the United Nations High Commissioner for Refugees and the Inter-American Institute for Cooperation on Agriculture.

These results clearly show that during the first half of this year Argentina contributed to strengthening MERCOSUR as a modern project for political, social and economic integration, thus boosting the willingness and commitment to adopt the decisions that are needed to enhance the regional process.

Finally, it was agreed in Mendoza that MERCOSUR should adapt and be updated in view of the multiple challenges posed by technological transformation. For such purpose, as stated in the Joint Communiqué, MERCOSUR members have undertaken to revitalize trade in services, to boost the region's export competitiveness by reducing the costs of production, logistics and administration and to promote a Digital Agenda that favours sustainable and inclusive development in our countries.

MERCOSUR thus seeks renewed regionalism with an emphasis on attracting investments and on participating in global value chains that create more and better jobs, by increasing competitiveness and improving infrastructure and connectivity.

Documents of the 50th Mercosur Summit: