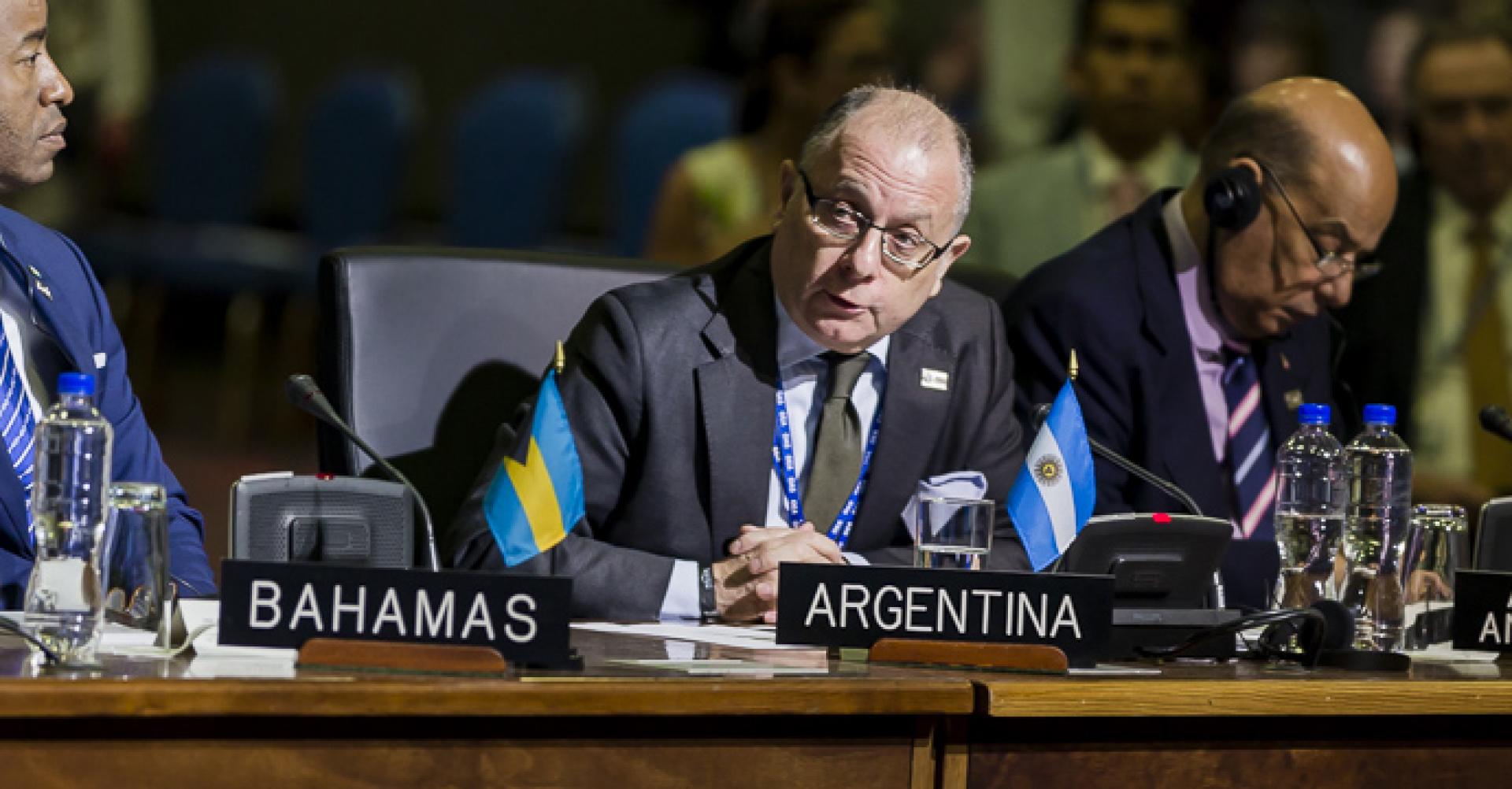 The Question of the Malvinas Islands: The international community renews its support for the resumption of negotiations on sovereignty

The General Assembly of the Organization of American States and the United Nations Special Committee on Decolonization reiterated their call for the resumption of negotiations in order to find a peaceful solution to the Question of the Malvinas Islands.

Last 21 June, the General Assembly of the Organization of American States (OAS) adopted by acclamation a new Declaration on the Question of the Malvinas Islands. In this Declaration, the OAS reaffirmed that the Question of the Malvinas Islands is a matter of enduring hemispheric concern and reiterated the need for the Governments of the Argentine Republic and the United Kingdom to resume, as soon as possible, negotiations on the sovereignty dispute, in order to find a peaceful solution to this protracted controversy.

The OAS Member States also expressed their satisfaction at the reaffirmation of the will of the Argentine Government to continue exploring all possible avenues towards a peaceful settlement of the dispute and its constructive approach towards the inhabitants of the Malvinas Islands.

Foreign Minister Faurie headed the Argentine delegation and, in his address, reasserted Argentina's claim for the full exercise of its legitimate sovereignty over the Malvinas, South Georgia, and South Sandwich Islands and the surrounding maritime areas, and reaffirmed the Argentine Government's firm will to resume negotiations with the United Kingdom in order to find a peaceful and lasting solution to the dispute, respecting the way of life of the inhabitants of the Islands and in accordance with the Argentine Constitution and United Nations General Assembly Resolution No. 2065 (XX).

The draft Declaration was submitted by Brazil's Permanent Representative and was expressly supported by a considerable number of delegations, which spoke in defence of the Argentine Republic's legitimate sovereignty rights. In addition, the OAS Secretary General, Luis Almagro, reaffirmed the need to resume negotiations in order to resolve the sovereignty dispute. Finally, the Uruguayan Foreign Minister requested that the Declaration be approved, and the Assembly adopted it by acclamation.

Two days later, on 23 June, Foreign Minister Jorge Faurie headed the Argentine delegation which participated in the session of the United Nations Special Committee on Decolonization in New York that addressed the Question of the Malvinas Islands. At the meeting, a new resolution urging Argentina and the United Kingdom to resume bilateral negotiations so as to find a peaceful solution to the sovereignty dispute over the Malvinas Islands as soon as possible was approved, in accordance with various General Assembly resolutions.

In his first intervention at the Committee, Foreign Minister Faurie underscored that the "Question of the Malvinas Islands is a major historical issue for all Argentines," and stated that "this is recognized in the First Transitory Clause of the Argentine Constitution."  "Malvinas is an issue that goes beyond governments and political and partisan differences: it is a true State policy," he explained.

The head of the Palacio San Martín noted that the passage of time "has neither undermined the validity of our rights nor weakened our conviction that this sovereignty dispute should be resolved through negotiations between both sides." He also renewed the Argentine Government's "full willingness" to resume negotiations.

In addition, he urged the United Kingdom to "end unilateral acts of exploration and exploitation of natural resources in the area under dispute", in accordance with United Nations resolutions, and renewed his plea to "strengthen the South Atlantic as a peace zone."

The Foreign Minister reiterated President Macri's desire to "begin a new stage in our relations with the United Kingdom, based on the bonds that have historically united both countries" and highlighted in particular the agreement reached in London, in December 2016, between Argentina, the United Kingdom and the International Committee of the Red Cross for the identification of unknown Argentine soldiers buried at the Darwin cemetery in the Malvinas Islands.

The draft resolution was submitted by the Chilean delegation and was also adopted by consensus.