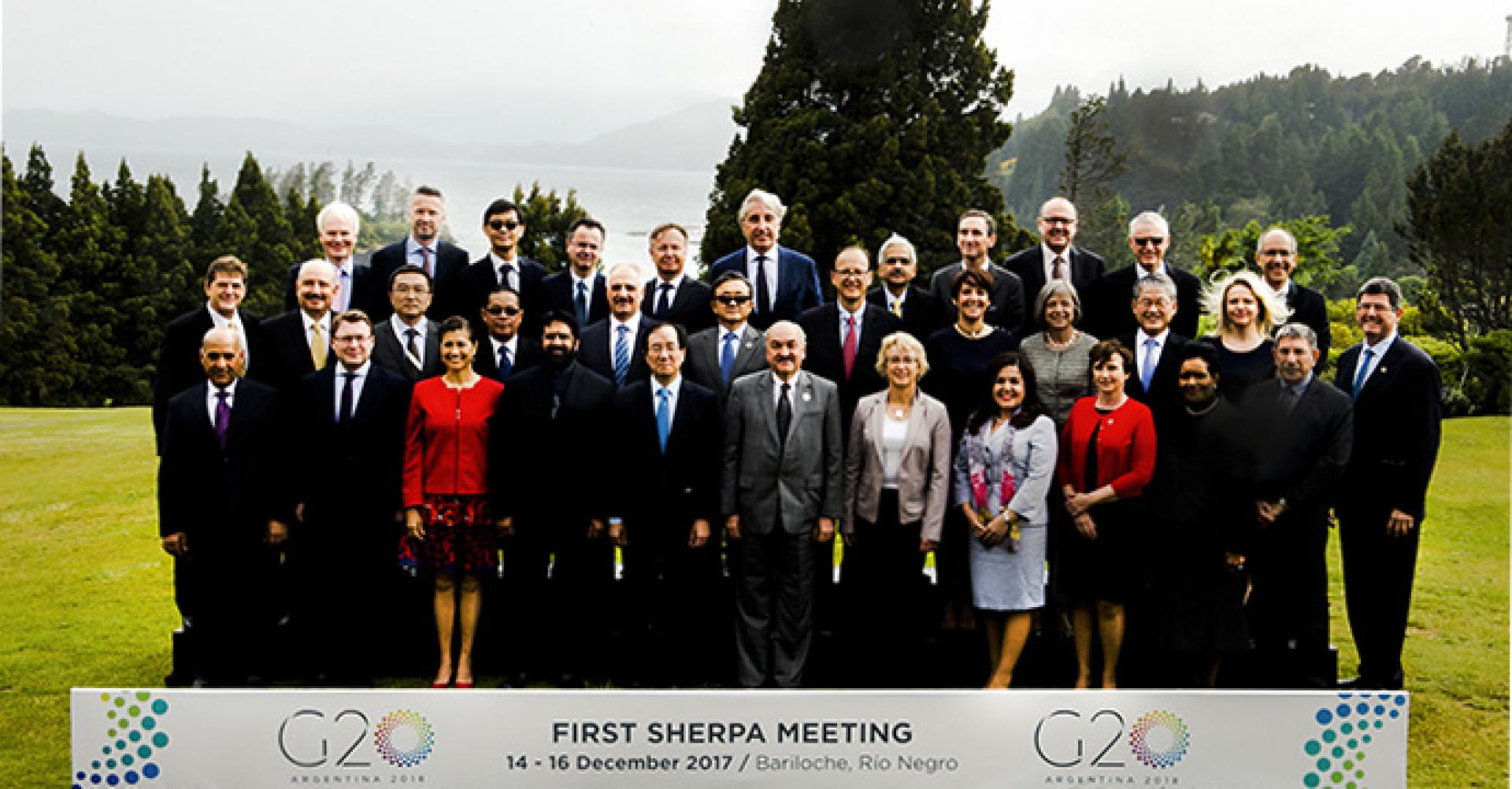 On 14-16 December, the first meeting of the G20 Sherpa track took place in the city of San Carlos de Bariloche, Argentina. The meeting, which was attended by representatives of member and guest countries, aimed at presenting Argentina's priorities to be addressed by the Working Groups in 2018.

The meeting was opened by the Foreign Minister, Ambassador Jorge Faurie, who outlined the goals of Argentina's G20 Presidency and underscored that "Public policies have to be more coordinated than ever. We wish to deliver a stable, just and sustainable world; one that will therefore be safer, more equitable and peaceful." For his part, the Governor of Río Negro Province, Alberto Weretilneck, welcomed the G20 Sherpas on the occasion of a reception held on the first evening of the working meeting. Guests expressed their gratitude for Argentina's hospitality and underscored the natural beauties of Bariloche and its privileged landscape.

The working meetings were chaired by the Argentine Sherpa, Ambassador Pedro Villagra Delgado, and held in a friendly and cooperative spirit, following a busy and broad schedule in which the Argentine G20 Presidency presented, through the Working Groups' coordinators, the Argentine perspective for the G20's work on each topic in 2018, which was welcomed by the Forum members. They agreed on the importance of the chosen topics and on the need to work jointly towards reaching consensus. In that vein, it should be noted that Argentina has highlighted that it will prioritize building consensus, active dialogue and coordination of efforts by G20 countries in order to advance fair and sustainable development.

The first session for the presentation of thematic areas related to the global economy was chaired by the Finance Deputy, Laura Jaitman, of the Ministry of Economy, who underscored the importance of financial and macroeconomic stability and governance on the G20 agenda and the close cooperation between the G20 Sherpa and Finance tracks under the Argentine Presidency.
Guided by the Argentine G20 Presidency slogan, "Building consensus for fair and sustainable development," three main issues have been established as priorities: the future of work, linked to education and digitalization; investment in infrastructure for development; and pursuing a sustainable food security for the future. Emphasis will also be placed on the gender perspective as a cross-cutting issue to be included within all G20 thematic areas, whether of the Sherpa or Finance track, with a view to achieving true equality and empowerment for women. The Argentine G20 Presidency will also build on the work of previous Presidencies, so as to ensure consistency in the Group’s work.

The Sherpa track, which is in charge of the political coordination of the G20, addresses multiple issues of great importance for global governance, including, inter alia, aspects related to sustainable development; the operation and integration of global value chains in the agriculture industry; key issues related to Digital Economy, such as Industry 4.0 and technology adoption by SMEs and entrepreneurs; coordinated actions for soil conservation; clean energy use; climate change, and anti-corruption.

The G20 works in close cooperation with different stakeholders, which participate in the G20 Engagement Groups, addressing issues on the G20 agenda and other issues of global importance, as well as discussing proposals and submitting non-binding recommendations to the G20 Leaders. These Engagement Groups (Business20, Women20, Civil20, Labor20, Think20, Science20, and Youth20) have already started working.
The G20's work under the Argentine Presidency will continue through 2018 with over 50 working meetings of experts and Ministers, who will formulate proposals that will, through the Sherpa track, be the basis for the Leaders' work at the Summit to be held on 30 November and 1 December 2018, at the end of which the Leaders' Declaration will be issued.