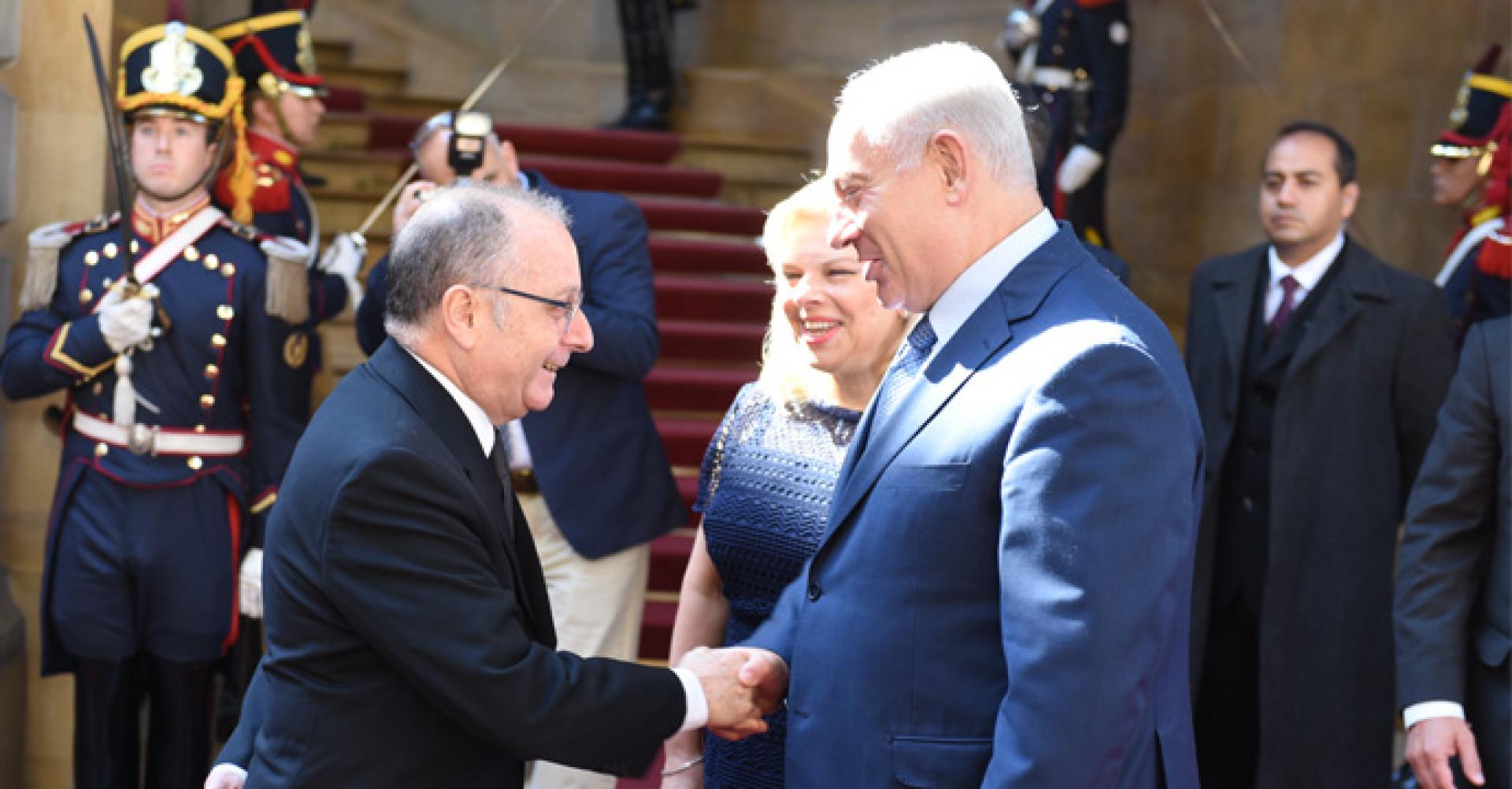 First official visit by an Israeli Prime Minister to Argentina

Argentina welcomed an Israeli Prime Minister for the first time. The visit of Benjamin Netanyahu, who paid homage to Argentina's Liberator, José de San Martín, reaffirms the interest of both governments in strengthening this historical relationship.

The Israeli Prime Minister, Benjamin Netanyahu, visited Argentina last 11-13 September, alongside a large delegation of businesspeople from over 20 sectors, which included telecommunications, agriculture and security.

In the context of his official visit, the Israeli Prime Minister held a working meeting with Argentine President Mauricio Macri on 12 September. The meeting evidenced the excellent bilateral relationship between both countries and gave new impetus to their multiple long-standing political, economic, cultural and cooperation bonds.

Both chief executives reviewed the agenda and ratified their governments' commitment to strengthening bilateral cooperation. In addition, they underscored the challenges faced by both countries on key issues pertaining to environmental protection and the well-being of their inhabitants, such as water management, forestry, the fight against desertification and access to cleaner technologies and energy sources.

On the economic front, they stressed the importance of strengthening bonds through trade expansion and diversification. President Macri remarked that Israel is an important partner for Argentina and mentioned the Argentine Government's focus on supporting entrepreneurs and SMEs, in view of their essential contribution to added value in supply chains and to the creation of real jobs. He also thanked the Israeli Prime Minister for his country's strong support for Argentina's accession as a full member to the OECD. Moreover, President Macri was invited by Prime Minister Netanyahu to visit Israel in 2018.

During Prime Minister Netanyahu's visit, approximately 140,000 digitalized historical documents kept in the Argentine Foreign Ministry's Archives relating to the Holocaust and its historical background were given to the State of Israel. This represents a new contribution by Argentina —the only Latin American member of the International Holocaust Remembrance Alliance (IHRA)— that will enable a deeper understanding and broader dissemination of information on the unprecedented tragedy of the Holocaust, while encouraging reflection on crimes against humanity and discrimination.

On 12 September, following a lunch offered by the Argentine President, bilateral agreements on social security, assistance in customs matters and cooperation in the field of public and domestic security were signed.

The packed private agenda of the Israeli delegation included tributes at the AMIA headquarters and the Israel Embassy Square, as well as a meeting with authorities from Argentine Jewish community organizations.

Likewise, the Israeli multi-sector business mission participated in a series of meetings with Argentine counterparts at the Palacio San Martín on 11 September. In addition, an inter-institutional agreement between the Argentine Investment and International Trade Agency (AAICI) and the Israel Export and International Cooperation Institute (IEICI) was signed with a view to promoting investment and increasing trade between both countries.

The excellent relationship between Argentina and Israel dates back to 1949, but is deeply rooted in the very origins of the formation of Argentine society. Jewish immigration was one of the various migratory flows that helped to populate the Argentine territory and contributed to the formation of a society built and nurtured by the diversity of origins, religions and cultures. Nowadays, many descendants of those migratory flows play vital roles in the various areas of public and private life in our country. Similarly, about 100,000 Argentine migrants contribute to the development of the Israeli economy and society through their daily work.