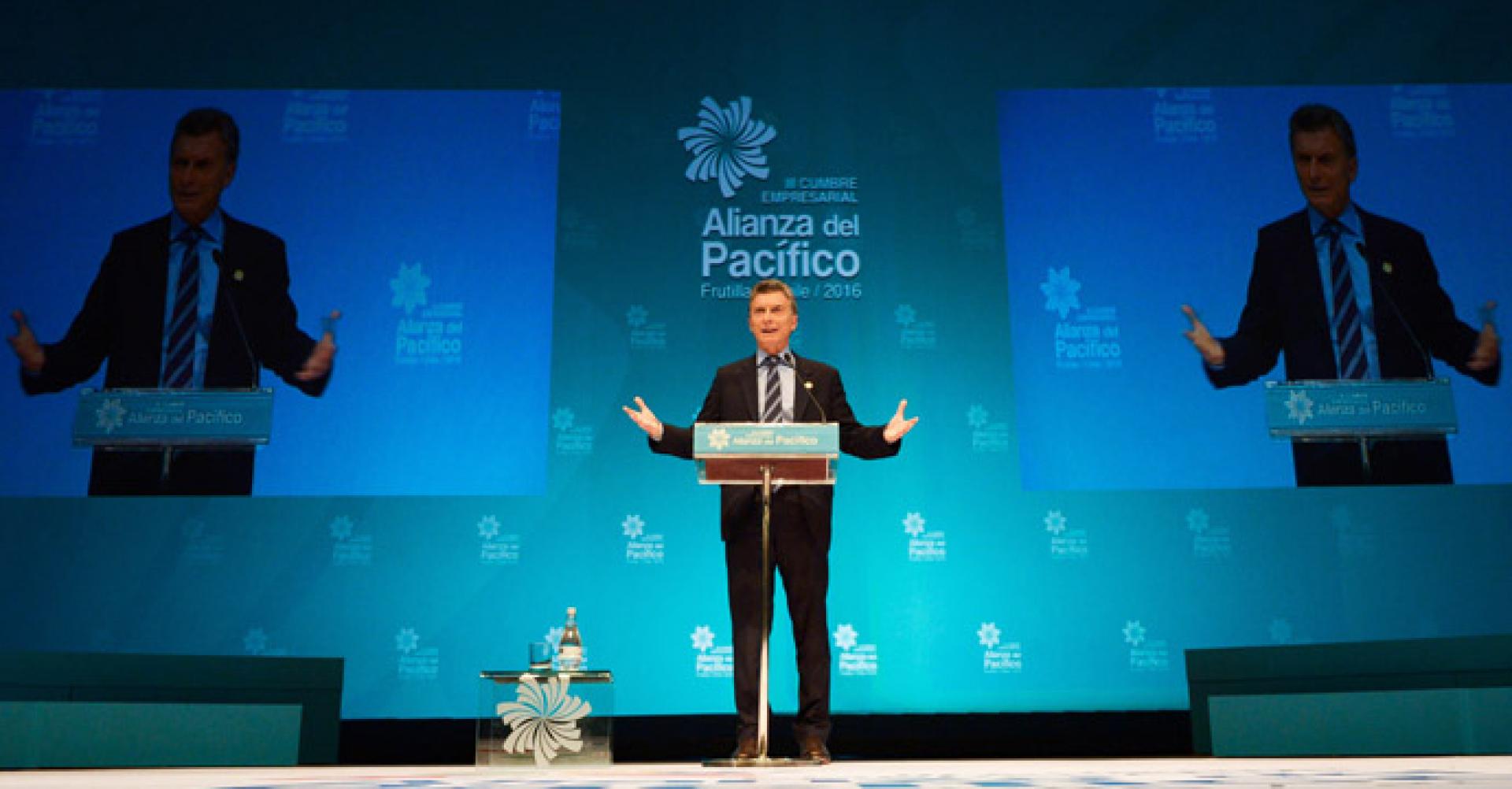 Building links with the Pacific Alliance

Argentina participated for the first time in the latest Pacific Alliance Summit as an Observer State. In so doing, and through MERCOSUR, Argentina seeks to strengthen trade and investment relations with Chile, Colombia, Mexico and Peru.

In late June, on the occasion of the 11th Pacific Alliance Summit held in the city of Puerto Varas, Chile, Argentina participated for the first time as an Observer State through a delegation of high-level authorities headed by President Mauricio Macri, who had been specially invited to deliver a speech at the 3rd Business Summit of the Alliance.

In his speech, President Macri highlighted the great future ahead for the region and stated that further institutional development and clear rules will lead to an increase in investment and employment, which will ensure equal opportunities and reduce poverty. In this context, he underscored the investment opportunities available in Argentina and welcomed businessmen willing to do business in the country. He also highlighted the need to promote exchanges and support integration through the MERCOSUR.

It is precisely through the MERCOSUR that Argentina seeks closer ties with the countries of the Pacific Alliance in order to strengthen the country’s international insertion, increase foreign trade and attract new productive investments by projecting itself to the world, especially to the dynamic Asia-Pacific region. For this reason, earlier this year Argentina requested to join the Alliance as an Observer State and was immediately admitted by the Council of Ministers.

Foreign Minister Malcorra was invited to participate in the 1st Ministerial Meeting between the Pacific Alliance and its Observer States on “Internationalization of Small and Medium-Sized Enterprises (SMEs)”, the sector of the economy that generates most jobs and which requires special support to integrate into regional and global value chains.

The Pacific Alliance, which includes Chile, Colombia, Mexico and Peru, is a regional integration mechanism aimed, among other things, at progressing gradually towards the free movement of goods, services, capital and people. This mechanism, which has gained the attention of many countries, currently comprises 49 observer states and positions itself as a space for the promotion of free trade and the attraction of foreign investment. Argentina´s participation in the recent Summit held in Chile was welcomed and highlighted by Pacific Alliance leaders, with whom President Macri had a positive meeting.

Argentina’s participation as an Observer State implies, in fact, a natural expansion of longstanding economic relations. It should be remembered that all MERCOSUR member states and Pacific Alliance countries have been members since 1980 of the Latin America Integration Association (ALADI). This organization has been used as a regulatory framework for the development of a remarkable process of regional economic and trade integration in which Economic Complementation Agreements have played a key role.

Concerning the progress made in the relations between MERCOSUR and the Pacific Alliance, it should be noted that institutional dialogue has commenced,  involving joint work in several fields, such as single windows for foreign trade, customs cooperation, trade promotion, SMEs, accumulation of origin and movement of people, among others.