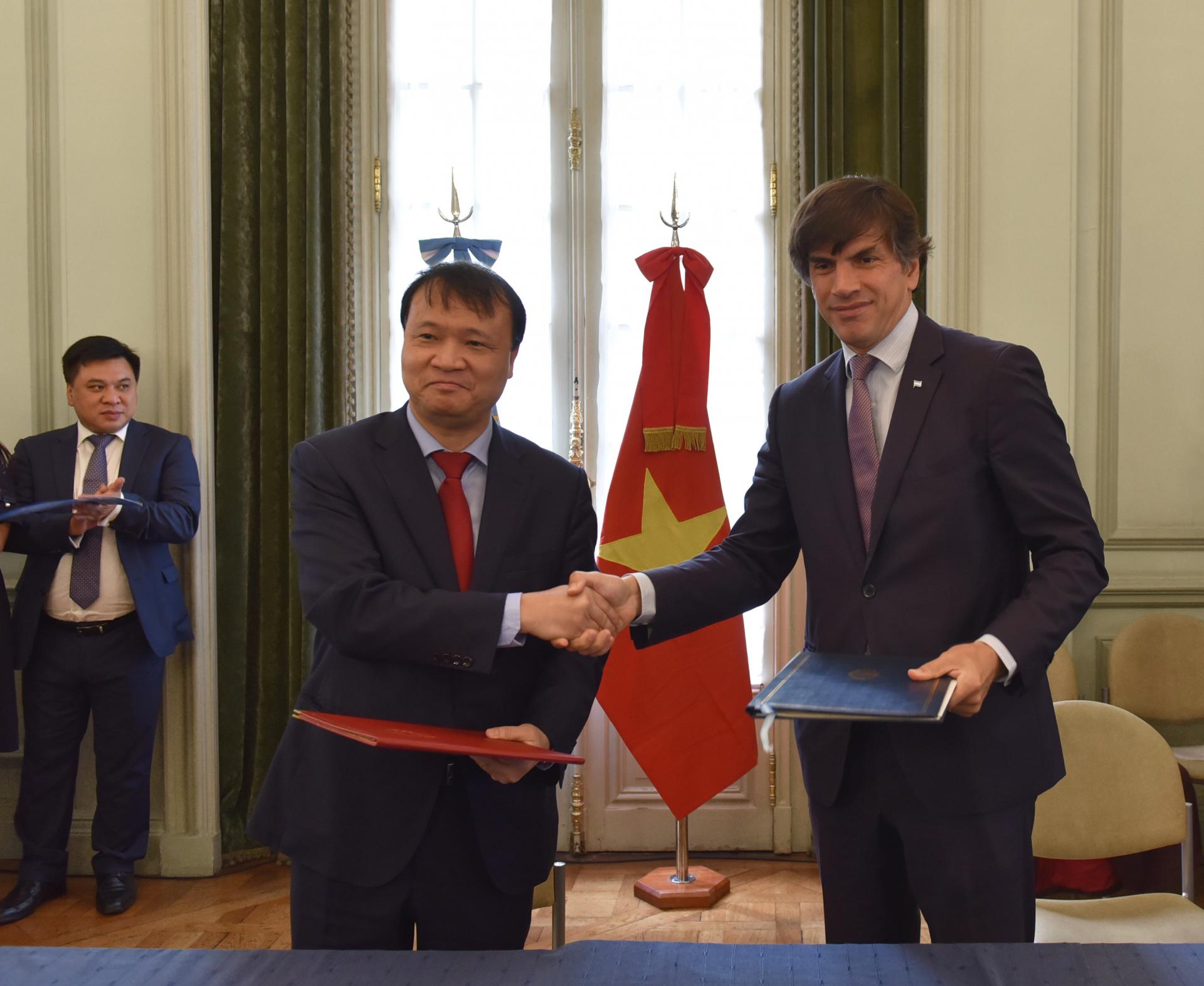 Visit of the Deputy Minister of Industry and Trade of Vietnam, a comprehensive strategic partner of Argentina

On 25-26 October, the 6th Meeting of the Argentina-Vietnam Intergovernmental Committe on Economic and Trade Cooperation was held at the Palacio San Martín and was chaired by the Secretary for International Economic Relations of the Argentine Foreign Ministry, Horacio Reyser, and the Vietnamese Deputy Minister of Trade Industry and Trade, Đỗ Thắng Hải.

The meeting was held within the context of the 45th anniversary of the establishment of diplomatic relations between both countries, a period during which Vietnam has became a strategic partner for Argentina.

Vietnam has 93 million inhabitants and averaged economic growth of 6.2% between 2013 and 2017. In 2017, it became the fifth main destination for Argentine exports and Argentina´s second largest trade surplus. In the last year, bilateral trade amounted to USD 3 billion.

Given the economic complementarity between Argentina and Vietnam, there is great potential to increase bilateral trade. During the Meeting of the Committee, efforts were especially aimed at achieving this goal. Among other measures, a Memorandum of Understanding between AAICI (Argentine Investment and International Trade Agency) and VIETRADE (Vietnam Trade Promotion Agency) was signed, setting a framework for actions to promote trade and investments and facilitate business missions between Argentina and Vietnam.

Officials also assessed the results of recent multi-sector bilateral missions and official visits, which were aimed at opening up the respective markets to new agricultural and agro-industrial products. Agricultural and phitosanitary issues figured prominently, and agreements were reached in addition to proposals being made to speed up negotiations.

Furthermore, Argentina expressed its interest in MERCOSUR and Vietnam considering to initiate exploratory dialogue with a view to the potential negotiation of a Free Trade Agreement.

Finally, both parties noted the progress made on ongoing technical cooperation projects, agreed on the need to foster new projects and referred to the Regional Workshop on Technical Cooperation in Agro-Industry held on 30-31 July in Hanoi. This Workshop highlighted the positive outcome of technical cooperation between both countries and help to disseminate their capacities, technology and good practices in agro-industry.