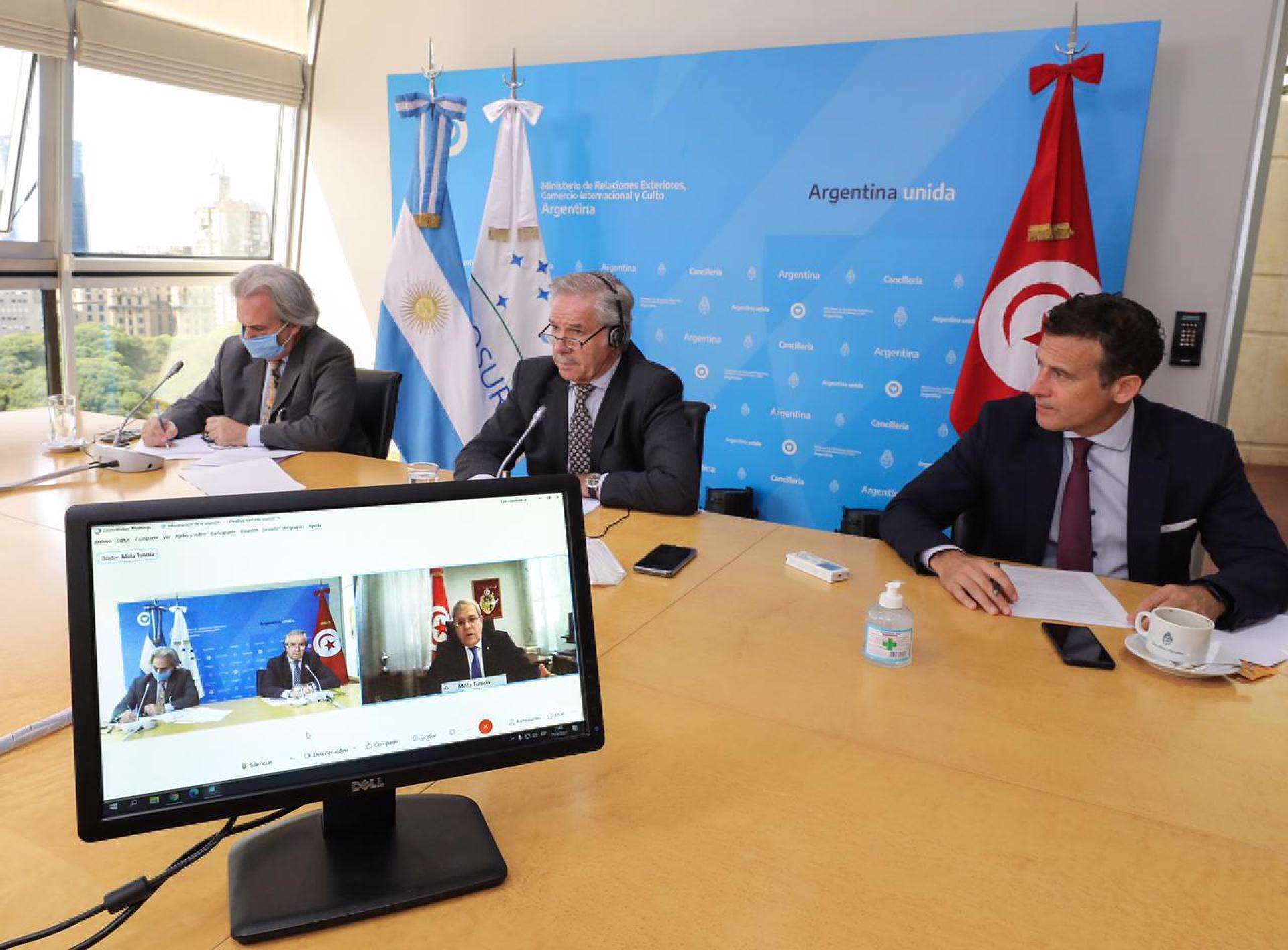 Videoconference between foreign minister Felipe Solá and his Tunisian counterpart

Today, Foreign Minister Felipe Solá held a videoconference with his Tunisian counterpart Othman Jerandi, Minister of Foreign Affairs, Migration and Tunisians Abroad, during which they discussed opportunities to increase trade and scientific-technological exchanges and to strengthen existing South-South Cooperation. They also shared experiences in both countries with regard to Covid-19.

The foreign ministers highlighted the importance of the progress made on trade in three different areas: agricultural cooperation and trade, expansion in the medical field and consolidation of a binational business chamber to dynamize bilateral trade, mainly in the automotive sector.

Minister Solá expressed Argentina’s interest in holding a meeting of the Joint Committee shortly, along with a high-level visit including representatives of the private sector. “Within the context of a wide-ranging mission to northern Africa, we are preparing a Multisectoral Trade Mission to Tunisia which is intended to take place in the next few months, as soon as permitted by the pandemic,” Solá stated, joined by the Deputy Foreign Minister, Pablo Tettamanti and the Chief of the Private Office of the Foreign Ministry, Guillermo Justo Chaves.

At the agricultural level, the Minister highlighted the possibilities for the export of egg products, bovine semen and embryos, boneless bovine meat and ovine bone-in meat, milk and dairy products and for the sale of domestic canines and felines.

With regard to the automotive sector, the Foreign Minister noted the importance of deepening the dialogue initiated in 2018 between the Argentine Association of Automotive Factories and the Tunisian Automotive Association, with a view to negotiating an automotive agreement to reduce to zero the tariffs on cars and to establish a quota for units.

He also expressed the interest of the pharmaceutical sector in increasing its presence in the Tunisian market. Argentine laboratories are in the process of registering drugs for the treatment of hepatitis B, multiple sclerosis and osteoporosis and agreements also exist for the joint production of pharmaceutical products in Tunisia and to obtain preferences applied by the Tunisian Government to public tenders in which local producers participate.

“We must advance and strengthen South-South Cooperation and we have to be as strong as possible to deal with future issues, thus increasing solidarity and cooperation between our countries,” Solá stated during the virtual meeting.

During our country’s Mercosur Pro Tempore Presidency, Argentina will make every effort to move forward in the negotiation process with Tunisia, since Argentina views this country as an important partner and a gateway into the region for our products. In this regard, it is vital for MERCOSUR to strengthen its relationship with Northern Africa and particularly with Tunisia.

The Foreign Minister thanked Jerandi on behalf of the Argentine Government for Tunisia’s long-standing support for the resumption of negotiations between Argentina and the United Kingdom, in order to find a peaceful and definitive solution to the Question of the Malvinas, in accordance with the relevant United Nations resolutions. In particular, he thanked him for his country’s support regarding the consensus for the annual adoption of the resolution on the Question of the Malvinas in the Special Committee on Decolonization.

In the year that marks the 60th anniversary of the establishment of diplomatic relations between the Argentine Republic and the Republic of Tunisia, both foreign ministers also highlighted the cooperation between the Argentine Foreign Service Institute (ISEN) and the Diplomatic Institute of Tunisia, which included invitations for young Tunisian diplomats to take part in the foreign diplomats training organized by ISEN annually and in the Programme for Young Foreign Diplomats.