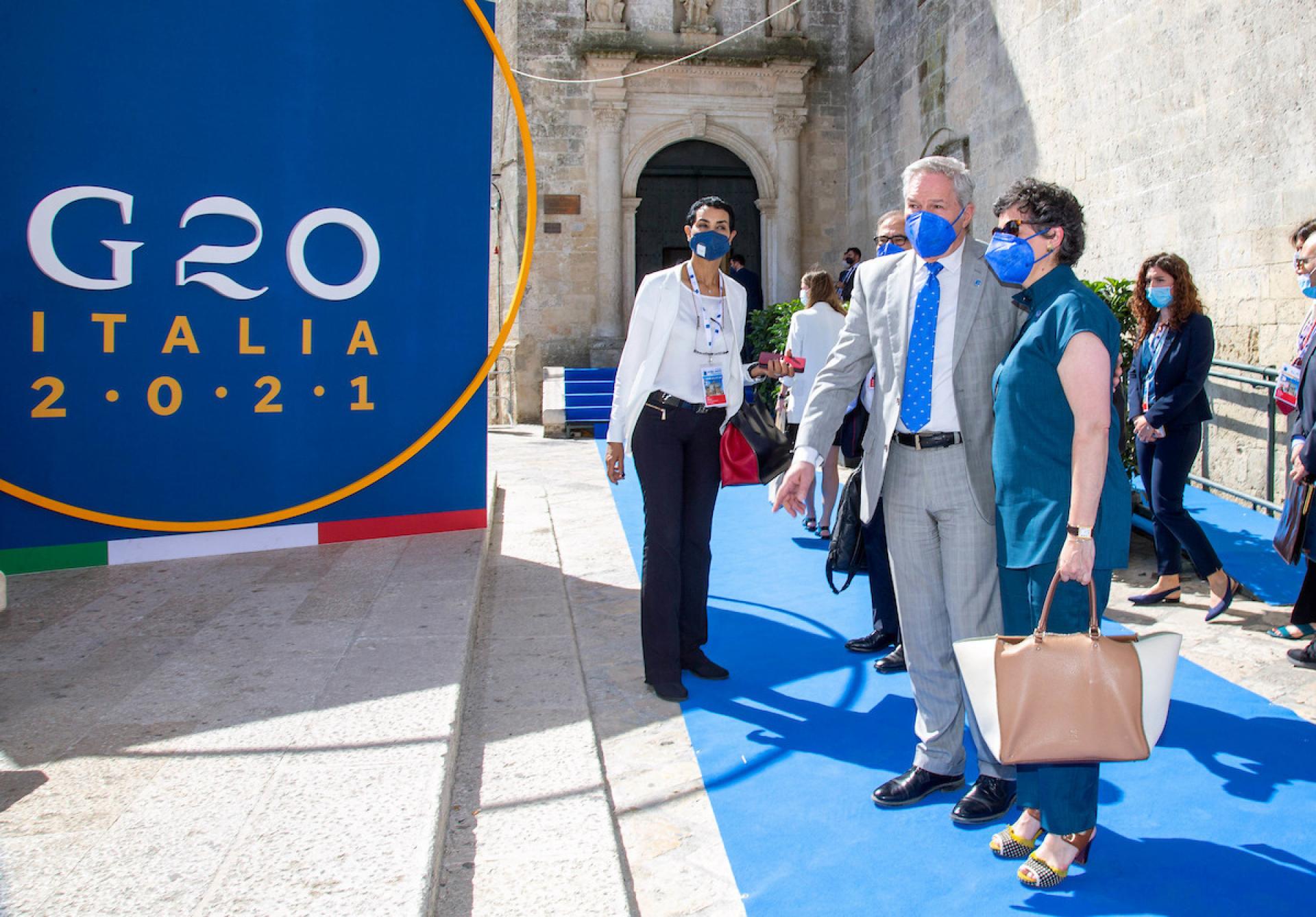 Solá at G20 Summit: “We have the opportunity to create a better economy with less inequality”

“Today, more than ever, we must strengthen international cooperation and solidarity to achieve inclusive and sustainable post-COVID-19 recovery,” Foreign Minister Felipe Solá stated today during the G20 Foreign Affairs and Development Ministerial Meeting, held in Matera, Italy, one of the objectives of which is to discuss ways to strengthen “multilateralism and global governance” in view of the urgent problems facing the international community.

Solá referred to the serious social and economic effects of the pandemic, and advocated “redoubling efforts to guarantee global mass vaccination and promote voluntary licensing agreements that enable the necessary transfer of knowledge and technology to produce vaccines on all continents.” He also called on States to mobilize “necessary financial resources to develop and strengthen critical health infrastructure, especially in developing countries.”

Adressing his counterparts of the G20 nations and representatives of international and regional organizations at Palazzo Lanfranchi, the Minister highlighted the importance of “preparedness for and response to health emergencies, based on international solidarity and cooperation” in order to “prevent future epidemics from becoming new global catastrophes.”

“We need a common global growth plan that allows for coordinated fiscal and monetary interventions in order to avoid unequal and unbalanced recovery and that guarantees a more equal future,” Solá stated during his first address, adding that “we have the opportunity to create a better economy that produces less carbon, creates less inequality, and provides digital access and access to new technologies for all. The G20 must work towards that end through specific and shared political actions.”

During the Summit’s second session, which addressed the health and socioeconomic consequences of the pandemic in Africa, Solá stressed that “the COVID-19 pandemic has revealed the weaknesses of the international system and the persistence of selfish nationalism,” and for that reason “it is necessary to review the financial and trade conditions that contribute to its development,” because “debt reduction initiatives are still inadequate and not ambitious enough.”

He also insisted “on the need to decidedly move forward with the agricultural reform process,” because “from a trade standpoint, developing counties face distortions in production and trade, particularly regarding agricultural trade.”

“There is no development or production model that applies to all countries equally. Countries with greater responsibility for environmental degradation should provide the economic and technological tools to allow developing countries to make their production more sustainable” the Foreign Minister stated, adding that “the transition to more sustainable production models must be gradual and respectful of the methods and times of each country, based on their productive, economic and social situation.”

The Italian G20 Presidency proposed including this year a joint Meeting of the Foreign Affairs and Development Ministers, which was held in the afternoon, and was intended to discuss specific actions to deal with the emerging food crises and achieve the Zero Hunger goal by 2030.

“Argentina makes permanent efforts to improve the agricultural and livestock production capacities of developing countries through South-South Cooperation.  There are over forty projects underway in Latin America, the Caribbean, Africa and Asia, in such varied fields as post-harvest management, genetics, biotechnology, quality certification, organic agriculture and rural development,” Solá listed.

“We are important suppliers of healthy, nutritious and quality food. Our agricultural exports increased during the most uncertain months of the COVID-19 pandemic,” the Minister stated after calling for “a rules-based multilateral trade system that is predictable, and the normal operation of global value chains.”

In addition to the Ministerial Summit, Foreign Minister Solá, joined by the Chief of the Private Office of the Foreign Ministry, Guillermo Justo Chaves, held a busy schedule of bilateral meetings that included meetings with the U.S. Secretary of State, Antony Blinken, and the German Foreign Minister, Heiko Maas. He also met with his counterparts of Turkey, Mevlüt Cavusoglu; and Saudi Arabia, Faisal Bin Farhan Al Saud; as well as the High Representative of the European Union for Foreign Affairs and Security Policy, D. Josep Borrell Fontelles, among others.