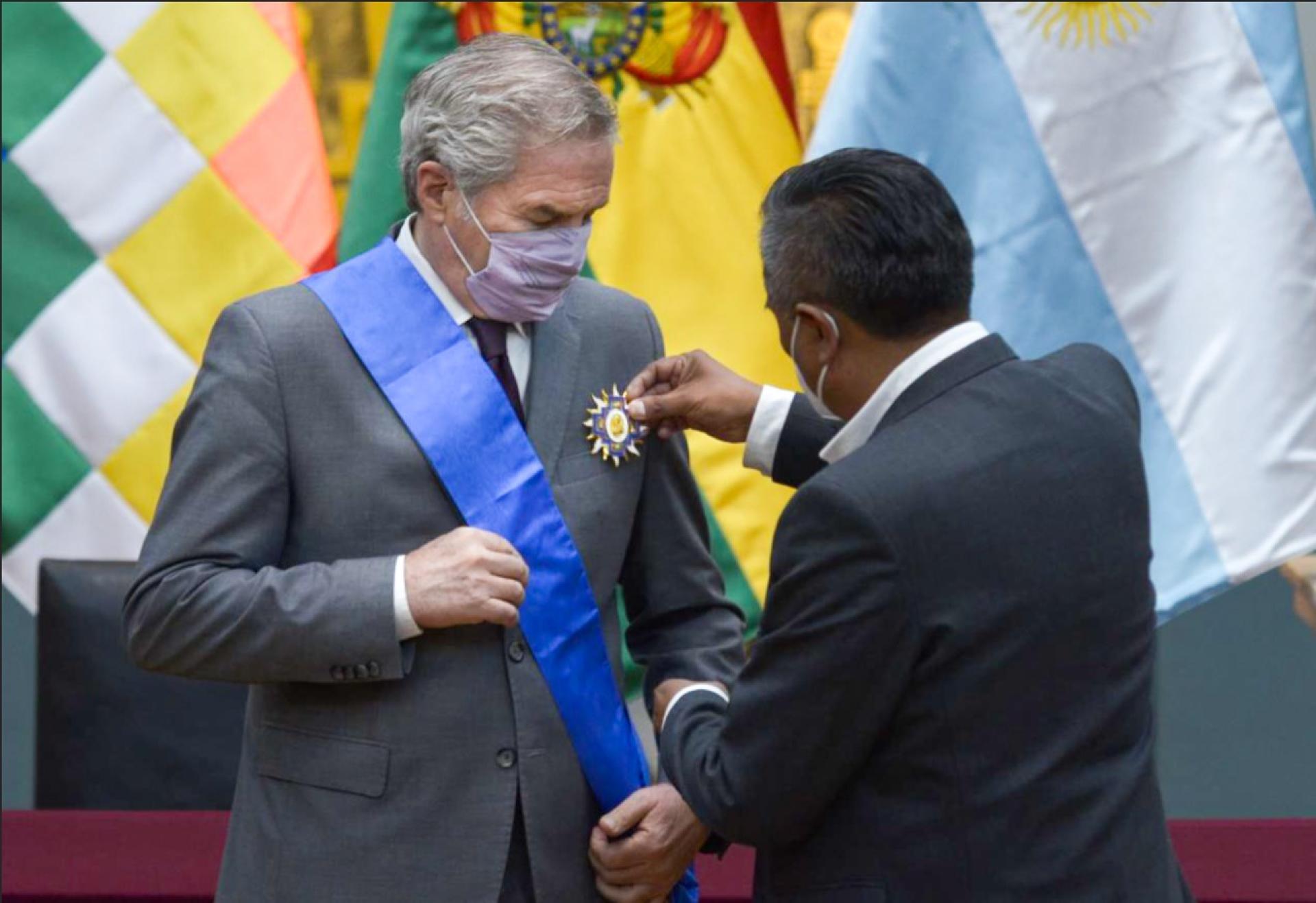 Sola expressed his gratitude for receiving “this honour for the acts of Argentina in very difficult times for Bolivia, when President Evo Morales was overthrown by a coup d’état.” And he stressed that: “this had epic value, but the key actor was Alberto Fernández. Let me be clear, the crucial steps we took for former President Evo Morales, for his delegation and to rescue what Bolivia had had for many years were taken by my President, Alberto Fernández.”

The Argentine Foreign Minister recalled that when the coup was starting, Alberto Fernández, then President-Elect, “picked up the telephone and called the Mexican President, Manuel López Obrador, to send an airplane to pick up Evo Morales, Álvaro García Linera and other persons whose lives were in danger.”

“This made it possible to form an organization once again so that MAS, representing the people of Bolivia, could win the elections. The rest is a major achievement of the Bolivian people: restoring democracy, setting things straight, having once again a government of the people and for the people,” he added.

The Argentine Republic condemned the coup d’état of November 2019 and never recognized the regime of Jeanine Añez. In December 2019, after staying for a month in Mexico, Evo Morales, Vice-president Álvaro García Linera and members of the Cabinet who were also persecuted, took shelter in Argentina, where they stayed until November 2020, when they could finally return to Bolivia after the victory of MAS.

“Our Argentine brothers and sisters had the courage to prosecute and convict those responsible for the massacres during the dictatorship. This took them years, decades, and their courage was displayed when Solá made his voice heard at international fora,” he stated, adding that: “We value, respect and thank for that, because otherwise the narrative of those who staged the coup would have prevailed in the world.”

The Foreign Minister was joined by the Chief of the Private Office of the Foreign Ministry, Guillermo Justo Chaves; the Secretary for International Economic Relations, Jorge Neme; the Undersecretary for Issues of the Americas, Juan Valle; and the Ambassador-Designate in La Paz, Ariel Basteiro.

The Legion of Honour “Marshal Andrés de Santa Cruz y Calahumana” was established by Supreme Decree in 1989 and is awarded to citizens in recognition of their meritorious services to the Plurinational State of Bolivia.