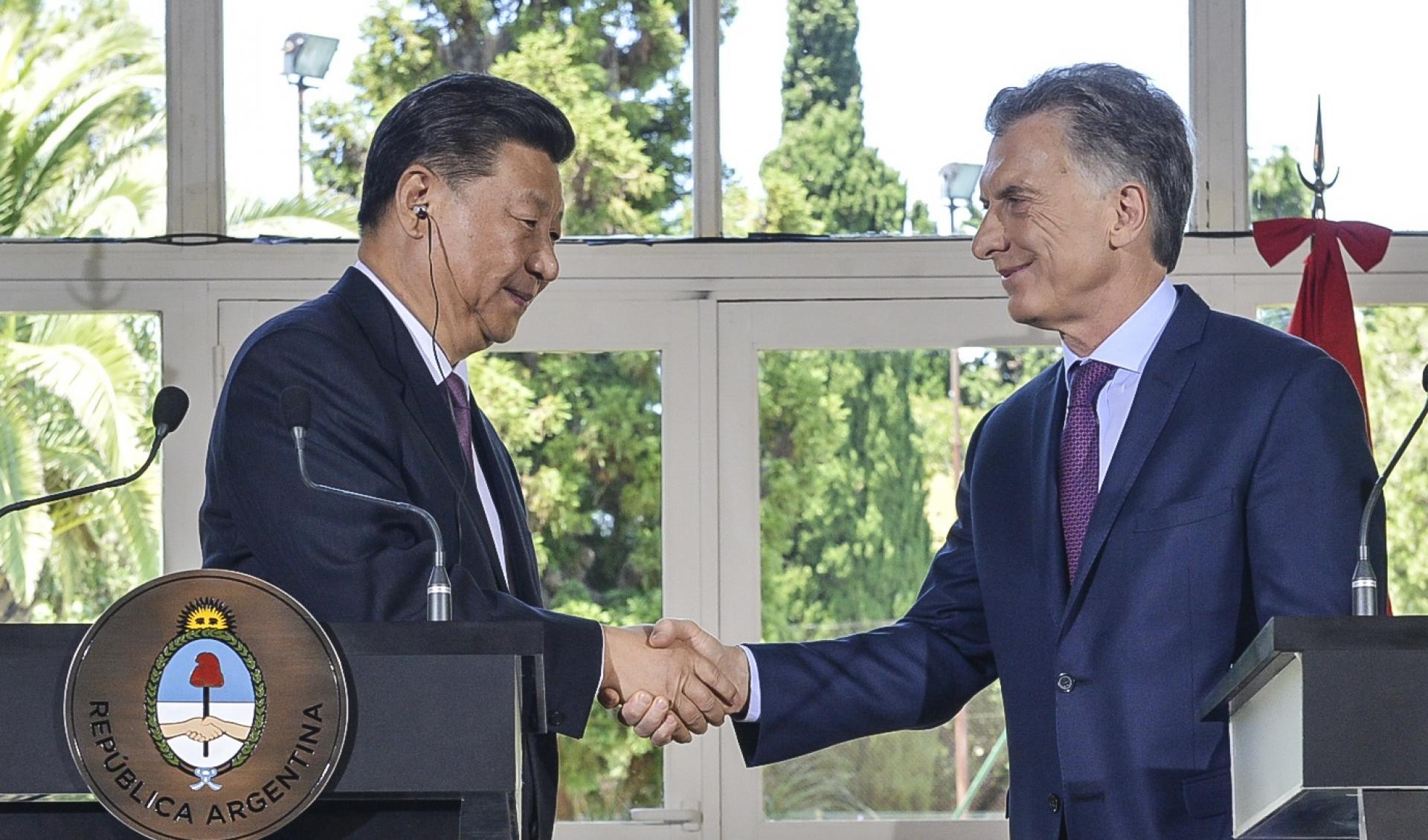 2. President Xi Jinping congratulated President Macri on the successful organization of the G20 Summit and the important role played by the Argentine Presidency and the great efforts undertaken for the Summit.

3. The leaders held a friendly and fruitful dialogue on the bilateral agenda, as well as regional and global matters, and agreed that China and Argentina face a complex international scenario. In this regard, they agreed to continue working on the Comprehensive Strategic Partnership, whose development is based on the principles of mutual respect, equality, mutual benefit and advantage, and to boost exchanges and collaboration on every front of the bilateral relationship in order to achieve the development of both countries.

4. Both Parties highly valued the positive results obtained by both Heads of State in the five meetings held since 2016 and agreed that frequent high-level contacts are milestones in the development of bilateral relations. In this regard, they agreed to continue exchanging views on bilateral, regional and global issues and matters of shared interest related to the Sino-Argentine relationship.

5. Argentina thanked China for strongly supporting its efforts to bolster economic and financial stability. Both Parties will continue strengthening tax and financial cooperation, including currency swap, increasing the use of national currency in trade and bilateral investments, further encouraging Chinese and Argentine financial institutions to establish subsidiaries in each other's territory for the provision of support and financial services to bilateral projects.

6. Both Parties agreed to maintain exchanges at the level of their National Governments, legislative bodies, political parties and subnational bodies, fostering mutual understanding, and to lay strong bases for the development of relations between China and Argentina. They also welcomed the outcome of the 3rd Meeting for Political Dialogue Between Members of Parliament (Buenos Aires, 8 November 2018).

7. Furthermore, they ratified their mutual support with regard to priorities pertaining to the essential interests of each Party. Argentina reaffirmed its continuous support for the One China policy while China reiterated its firm support for Argentina's sovereignty rights concerning the Question of the Malvinas Islands and the resumption of bilateral negotiations with a view to finding a peaceful resolution to the dispute, in accordance with the relevant resolutions of the United Nations.

8. Both Parties positively valued the important role played by the Binational Standing Committee and the Strategic Dialogue Mechanism on Economic Cooperation and Coordination (DECCE) in coordinating and promoting bilateral cooperation; they noted that the 2019-2023 Joint Action Plan between the People's Republic of China and the Argentine Republic, signed during this visit, is an action programme which will guide bilateral exchanges and cooperation in all areas for the next five years.

9. Both parties recalled with satisfaction the 1st Belt and Road Forum for International Cooperation held in May 2017, which was attended by the President of the Argentine Republic, Mauricio Macri. They agreed that the Belt and Road Initiative will provide dynamism to Sino-Argentine cooperation. They highlighted that the Comprehensive Strategic Partnership between both countries covers the Belt and Road Initiative and agreed to promote joint actions for cooperation between Argentine and Chinese companies in common projects in third-party markets.

10. Argentina congratulated China on the first ever China International Import Expo. China thanked Argentina for its active participation and encouraged Argentina to make use of the Expo's platforms in order to promote typical and quality Argentine goods.

11. Both Parties will join efforts to promote the balanced growth of bilateral trade and will strengthen their cooperation in the fields of quality inspection and quarantine, in addition to increasing cooperation on electronic commerce and trade facilitation.

12. Both Parties welcomed the successful participation of Chinese companies in Transport Infrastructure projects in the Argentine Republic, and valued progress made in this matter. Furthermore, they agreed to continue implementing important ongoing cooperation projects in the fields of hydroelectricity and railway and road works, among others, as well as infrastructure, nuclear energy, oil and gas, clean energy, agriculture, mining, tourism and manufacturing industry projects.

13. Both Parties will continue exchanges and cooperation in areas such as culture, education, tourism, environment, science and technology, media and sports. China will increase the number of scholarships offered to Argentina, promoting the exchange of students between both Parties with a view to continuously strengthening mutual understanding and friendship between both peoples. Both Parties will seek to speed up visa issuances in order to stimulate even more reciprocal visits between their citizens.

14. Furthermore, they positively valued the 2019-2023 Executive Programme on Cultural Cooperation between the Ministry of Culture and Tourism of the People's Republic of China and the Ministry of Education, Culture, Science and Technology of the Argentine Republic, signed during this visit.

15. Both Parties will consider the feasibility of organizing Cultural Years between both countries.

16. The Parties expressed their interest in strengthening cooperation with the Argentine-Chinese Food Science and Technology Centre, which has carried out joint research, exchange of scientists and training of human resources in said area.

17. The Parties agreed to strengthen exchanges and Antarctic scientific and logistics cooperation, under the Memorandum of Understanding on Antarctic Cooperation signed on 25 May 2017.

18. The Parties decided to strengthen cooperation and exchanges on training of diplomatic officials.

19. Both Parties will continue their dialogue on global governance, the UN Security Council reform, the implementation of the 2030 Agenda for Sustainable Development, the fight against climate change and other important issues within the context of international organizations and multilateral mechanisms such as the United Nations, G20, WTO and G77, reaffirming the role of multilateralism and the multilateral trading system to address global challenges. As regards the UN Security Council reform, both Parties agreed to reinforce their role and responsibilities in order to achieve greater efficiency and transparency, through extensive and democratic consultations, which seek to build consensus and avoid any reform in which differences between the parties are not resolved.

20. China supports Argentina's organization of the 2nd High-Level United Nations Conference on South-South Cooperation (PABA+40) to be held in Buenos Aires in March 2019 and agreed to work towards strengthening South-South Cooperation's contribution to sustainable development and multilateralism, as well as making progress on triangular cooperation schemes. The Parties conveyed their willingness to work on environmental protection, sustainable development and sustainable cities to fight climate change.

21. China positively valued the important role played by Argentina in regional matters and Argentine efforts to foster regional integration and cooperation between regional and extra-regional countries. Argentina is willing to foster dialogue between MERCOSUR and China. Both Parties underscored the consensus and outcome of the 2nd Ministerial Meeting of the China-CELAC Forum and the China-Latin America and the Caribbean Comprehensive Cooperation Association, characterized by equality, mutual benefits and shared development.

22. The Heads of State expressed their satisfaction with the signing of various cooperation agreements on politics, economy, trade, agriculture, animal and plant health, environment, culture and education, among others, during the visit.

23. President Xi Jinping sincerely thanked President Macri for the warm and friendly welcome extended by the Argentine Government and people during his visit.