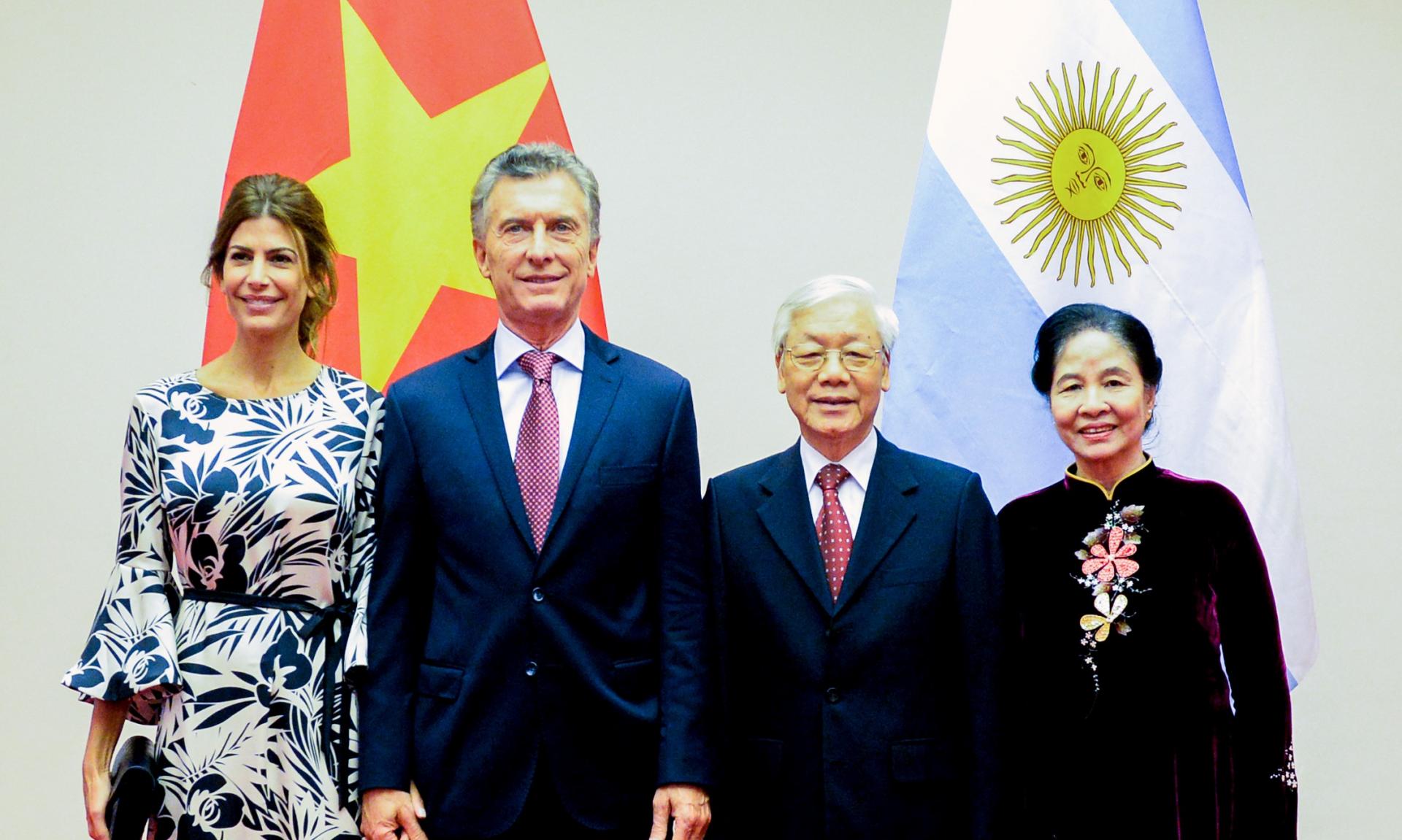 The Presidents held dialogue on several issues, including the bilateral agenda, their respective regions and international matters of shared interest. Given the important progress made on political, economic, trade and cooperation matters, they agreed to continue strengthening the current comprehensive partnership between both countries, with a view to developing a strategic partnership.

The Parties agreed to maintain high-level contacts and foster exchanges between national, provincial and municipal government officials, legislative bodies and other institutions, with a view to strengthening political and institutional ties between both countries.

The leaders analyzed the positive outcome of the 6th Meeting of the Argentina-Vietnam Intergovernmental Committee on Economy and Trade, which took place in Buenos Aires in October 2018, and agreed to continue working with this mechanism with a view to guaranteeing concrete results.

The leaders recalled that various mutual business missions took place in 2018 and underscored the importance of the Business Forum held on 21 February in Hanoi. Both Presidents hope that the dialogue between Argentine and Vietnamese companies will continue so as to increase trade in the food and industrial sectors. Furthermore, they stated that this type of fora fosters development and connection of talent and resources from both parties and urged institutions and companies to continue working to this end.

Considering that the theme of Expo 2023 —which will be hosted by Argentina— will be "Creative industries in digital convergence", both Parties agreed to promote the participation of Vietnamese companies from that industry.

For the purpose of establishing closer institutional ties based on the Memorandum of Understanding on Promotion of Trade and Investment in Argentina signed between the Trade Promotion Agency of the Ministry of Industry and Trade of Vietnam and the Argentine Agency of Investment and International Trade, they called for activities to jointly promote investment and trade between both countries.

The leaders expressed their satisfaction at the level of economic-trade exchanges and agreed to continue working with a view to increasing and diversifying them for the mutual benefit of both parties through trade missions, the Argentina-Vietnam Intergovernmental Committee on Economy and Trade and official visits. Within this context, they committed to foster the incorporation of higher value-added products, as well as strengthening cooperation between phytosanitary and zoosanitary control agencies on market access matters, in addition to maintaining cooperation and technical assistance actions. Along those lines, Argentina expresses a strong interest in working together with Vietnam on Agricultural Biotechnology.

The leaders welcomed the market opening agreement covering four products from each country: immediate market opening for Argentine lemon and grapefruit and Vietnamese dragon fruit (Pitahaya) and lychee. They also committed to open the markets for Argentine oranges and tangerines, as well as Vietnamese mangos and longans, as soon as possible, through the application of sanitary measures.

Argentina stresses its interest in continuing to work on the quick achievement of access to the Vietnamese market for apples, pears, blueberries and cherries, as well as pork, bovine semen and embryos, equine and bovine livestock, fish meal and oil and honey, among others. In turn, Vietnam requests the achievement and improvement of access to the Argentine market for vegetables, tubers, fruits, pepper, cashew nuts, aquatic products, wood, wood products, footwear and accessories, natural rubber and derivatives, electronic products, mechanical machinery and tools, agricultural machinery, porcelain, ceramic and handcrafted products, among others.

The leaders agreed to continue boosting tourism with a view to obtaining economic benefits and contributing to the improvement of knowledge and trust between both countries. In this regard, they approved the study of mutual application of measures aimed at facilitating the entry of citizens from both countries.

The Presidents agreed that a trade agreement between Mercosur and Vietnam could have a positive economic impact and agreed to discuss potential negotiations for this agreement.

Vietnam thanks the Argentine Government for its full recognition of Vietnam's status as a market economy in accordance with WTO agreements and states that equal recognition by all member countries of the Southern Common Market (MERCOSUR) will provide a strong basis for potential negotiations aimed at a trade agreement between Vietnam and MERCOSUR.

Argentina and Vietnam underscored the valuable contribution of technical cooperation as a tool for strengthening the bilateral relationship between both countries. The Parties recognized the cooperation programme, focused on agro-industry and forensic anthropology as core issues, based on which 15 projects have been funded by the Argentine Fund for International Cooperation (FO.AR). Argentina highlighted that Vietnam is the Southeast Asian country with which it shares the strongest bilateral relationship in terms of technical cooperation.

Argentina and Vietnam underscored the remarkable exchange of experiences, knowledge and technology between their technical institutes through the transfer of capacities, knowledge and technology. In agro-industry, this exchange was evidenced by the Regional Workshop on Technical Cooperation in the matter, held in July 2018 in Hanoi, based on which new initiatives on shared interest areas were launched. Furthermore, Vietnam praised the important results of the Argentine technical cooperation achieved by the Argentine Team of Forensic Anthropology (EAAF) with regard to the identification of Vietnamese War Martyrs' remains. The Parties agreed to maintain their cooperation on this field, within the context of the 2019-2021 Action Plan between the Ministry of Labour, Invalids and Social Affairs of Vietnam and the Ministry of Foreign Affairs and Worship of Argentina on technical cooperation for capacity-building in order to identify the remains of Vietnamese martyrs.

Both Parties reaffirmed their firm commitment to the negotiations of the 2nd High-Level United Nations Conference on South-South Cooperation, to be held on 20-22 March 2019 in Buenos Aires. In this regard, they agreed to work for the final document to make developing countries' contribution towards sustainable development visible and for triangular cooperation initiatives to be regarded as effective mechanisms to tackle development challenges still prevailing in their territories.

The leaders expressed their interest in cooperating in the peaceful uses of atomic energy and underscored cooperation potential in the fields of production of research reactors and atomic energy applications in the health sector, through Argentine company INVAP and Vietnamese institutes competent in atomic energy issues.

The Presidents underscored the importance of cooperating and exchanging information to combat transnational organized crime, terrorism, drug trafficking, money laundering and human trafficking. Furthermore, they underscored the importance of taking part in the solution of issues pertaining to global security and order through competent authorities from both countries, with a view to making further progress in 2019 in the negotiation between both Governments of a cooperation Agreement on the prevention of and fight against transnational organized crime and a cooperation Agreement on the prevention, investigation and fight against human trafficking, and to assist and protect the victims.

With a view to strengthening and expanding cultural relations, both leaders agreed to promote exchange through the 2019-2023 Cultural Exchange Programme, which will generate more dialogue between both countries. Furthermore, recognizing that information sharing and cooperation in the radio and television sectors are strategic tools to promote friendship and mutual understanding, they will foster the implementation of a Memorandum of Understanding on cooperation between the Federal System of Media and Public Contents of the Argentine Republic and the Voice of Vietnam.

The Parties agreed to foster cooperation in the sports sector, and they will strengthen communication and collaboration on international sports affairs.

The Parties agreed to maintain close cooperation and mutual support in multilateral fora, especially within the context of the United Nations, the Forum for East Asia-Latin America Cooperation (FEALAC) and South - South cooperation fora. The Vietnamese side thanked Argentina for its support for Vietnam's bid for non-permanent membership at the Security Council of the United Nations (UN) for the 2020-2021 period.

The Parties agreed to strengthen cooperation and exchanges on training of diplomatic officials.

The leaders agreed to move forward with the exchange of experiences in public healthcare, especially in policies regarding abusive alcohol and tobacco consumption. Within this context, the parties ratified the commitments made in the Memorandum of Understanding signed in 2009 between both countries' Administrations of Drugs (ANMAT – DAV) and called on those authorities to maintain dialogue to update the issues of mutual interest included in the Memorandum of Understanding.

Both Parties agreed that sovereignty and territorial disputes must be resolved peacefully in accordance with International Law.

Argentina and Vietnam reaffirmed the importance of a free, open, rules-based, transparent, inclusive, non-discriminatory and fair multilateral trading system, with the World Trade Organization as its cornerstone. The Parties expressed their support for joint cooperation in the improvement of the WTO, which includes negotiation, monitoring and dispute settlement mechanisms with a view to adequately addressing the challenges currently faced by the system, for the benefit of all citizens and businesses. The parties recognized the need to discuss ways to update the WTO in an inclusive manner, taking into account the needs of developing countries.

The Heads of State expressed their satisfaction with the signing of various cooperation agreements on culture, forensic pathology and public media, as well as the agreement signed between their respective business chambers, during the visit.