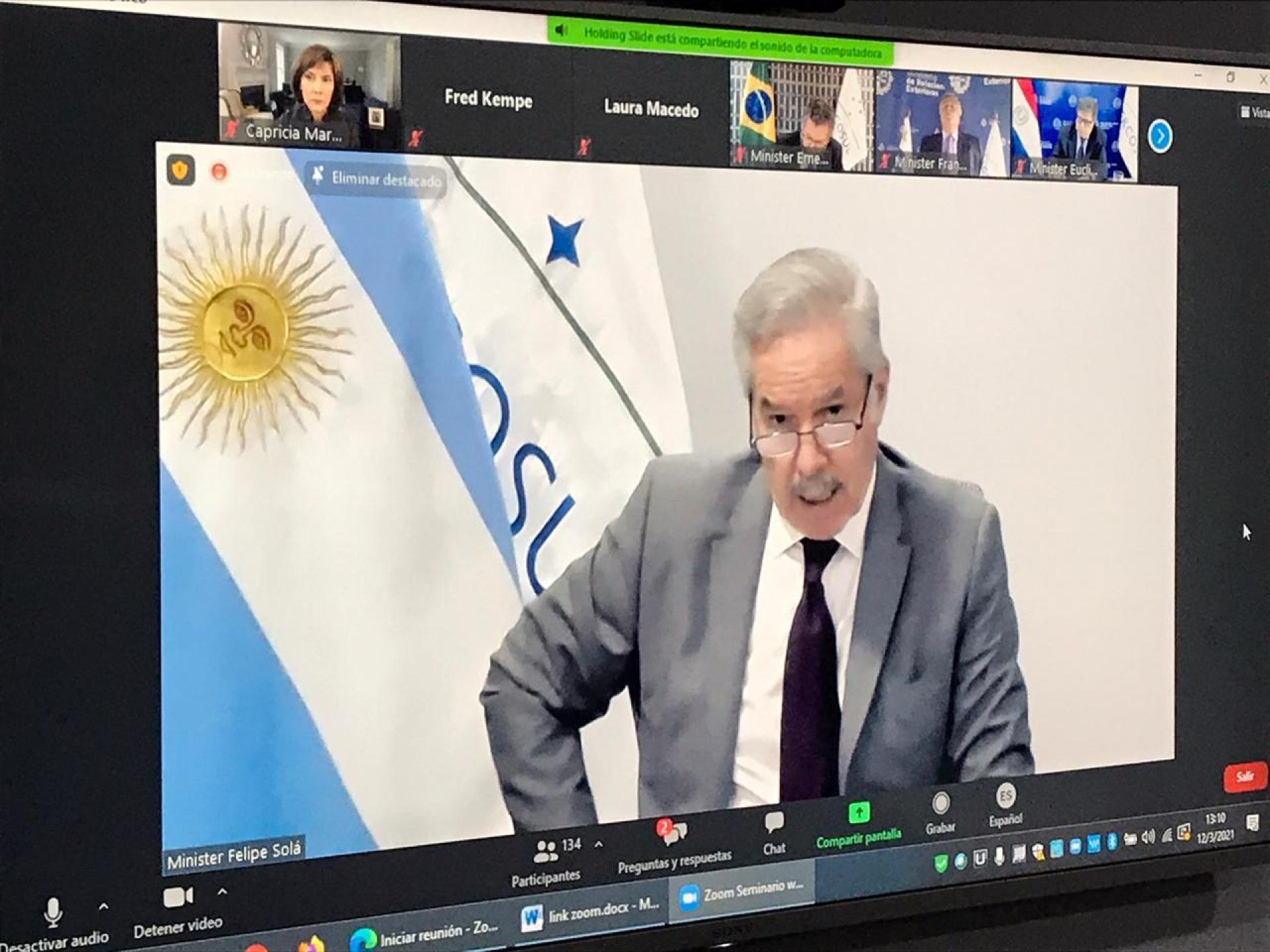 Today, Foreign Minister Felipe Solá, along with his Mercosur counterparts, took part in a conference organized by the Atlantic Council, during which he highlighted “the integration willingness” of the member states of the bloc and the need to “ensure that the region’s voice is heard on the topics of importance and concern to us".

The conference, entitled “International trade and Mercosur on its 30th anniversary”, was also attended by the Foreign Ministers of Brazil, Ernesto Araújo; Paraguay, Euclides Acevedo Candia; and Uruguay, Francisco Bustillo Bonass, and it was held a few days before the 30th anniversary of the signing of the Treaty of Asunción, which laid the cornerstone for the creation of Mercosur.

“South America needs to stop following the recipes and priorities of other countries. It has long been mature to make its own plans. This is not about ideological confrontation or a messianic reaffirmation of independence. This is about having a self-assertive and proactive role, and about ensuring that the region’s voice is heard on the topics of importance and concern to us,” the Argentine Foreign Minister stated.

“An agenda for food security should take into account the opinion of the world’s largest food producers, and Mercosur should carry that voice in different fora, such as the G20, WTO or FAO,” Solá stated, joined by the Secretary for International Economic Relations, Jorge Neme and the Chief of the Private Office of the Foreign Ministry, Guillermo Justo Chaves.

After reviewing the achievements of Mercosur in the last three decades, Solá stressed “the international perception of the region as a zone of peace and democracy” and “a highly important social asset: our countries view our neighbours as sister nations.” He added that based on this willingness to work together “any idea of military conflict between our countries dissapeared, and what emerged was tourism, investment opportunities, culture, business, study and work.”

Referring to present and future challenges, the Minister highlighted that “the relationship with China poses the risk of returning to a system under which we exchange primary products for industrialized products: we have been in that situation and we think that should not be the future of Mercosur.”

“Despite pressures from the anti-integration lobby, Mercosur has never stopped conducting joint negotiations. We can move forward and resume internal discussions on asymmetries and profit distribution, making the countries in the Americas and the Southern hemisphere a priority, and we can join our voices in the emerging debates on the new trade agenda,” he argued.

The Minister further stated that “the negotiations with the European Union are a starting point to continue to advance the external trade agenda”, without losing sight of the main goals: “diversifying our productive export base to end inequality and poverty that still exist in our region.”

He also supported the idea of adding new partners to Mercosur and stated that Argentina, which currently holds the Pro Tempore Presidency of the bloc, “thinks it is a good idea as long as other countries in South America wish to join.”

Solá described the pandemic as an “unprecedented global health crisis in the history of humankind, during which members of Mercosur tried to help each other, although the main issue is now the vaccine.” He also stressed that “a great need for cooperation has emerged, and that has been helpful but not enough.” “This could be an opportunity. We cannot wait for the perfect conditions to exist to do what we have to do. Those who just wait are in the worst position,” he noted.

“30 years ago, a process envisaged by President Juan Domingo Perón in 1949 began. He was the one who ushered in the unswerving integration process of South American nations, which is a path of fraternity", concluded Solá.