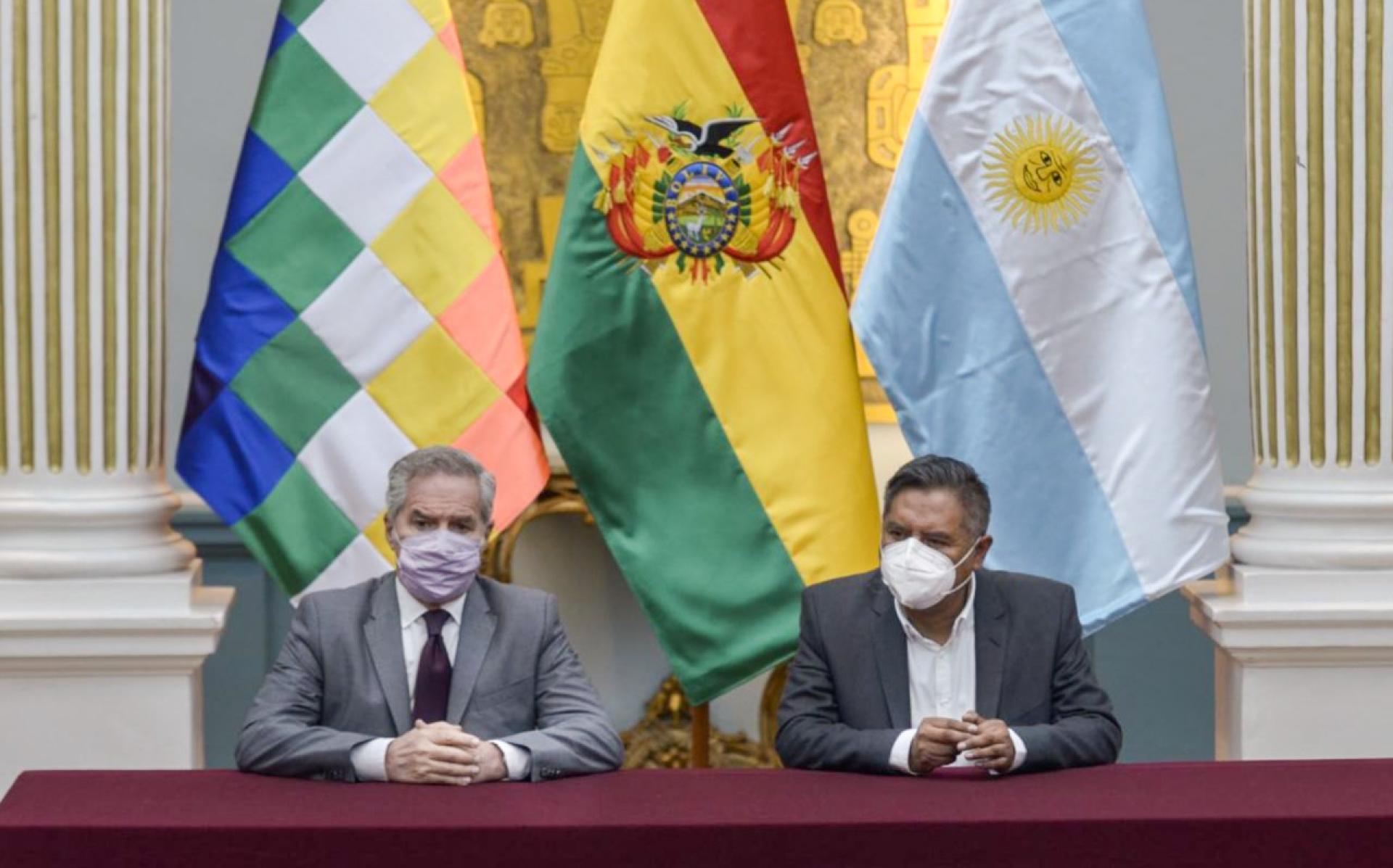 In the context of an official visit to the Plurinational State of Bolivia, Foreign Minister Solá attended a bilateral meeting in La Paz with his counterpart, Rogelio Mayta Mayta, to discuss the enhancement of political relations and review trade relations and investments. They discussed the process for Bolivia’s accession to Mercosur as a full member of the bloc.

“We had a most interesting working meeting, during which we discussed many important aspects of the relationship,” stated Solá after presenting the proposal for a “General Agreement of Cooperation, Integration and Fraternity,” conceived as a framework for the next ten years of bilateral relations, establishing medium- and long-term integration goals.

The project is structured around following strategic cooperation and integration pillars on infrastructure; border integration; agreements for transit; nuclear, space-related, and industrial cooperation for defence; and integration in the fields of energy as well as productive chains linked to lithium exploitation. In addition, the agreement includes political chapters related to cooperation on human rights, gender, environmental protection, and social development, among others.

“Argentina, Uruguay and Paraguay support Bolivia’s accession to Mercosur as a full member, whereas in Brazil the process is on hold in Congress,” recalled Solá, and he asked for this topic be discussed during the next Mercosur summit to be held on 26 March in Buenos Aires. “We hope that Bolivia’s accession as a full Member State will be ratified there,” he stated.

Regarding the possible joint exploitation of lithium, “we believe that there is an enormous technological and developed potential for extraction in Bolivia, and both countries want wide-ranging technological cooperation that may later lead to joint production,” Solá highlighted. “We will discuss this with Bolivia to scope out the real possibilities for industrializing lithium, to give it much more value, in a market that is emerging with great strength,” he stated.

In connection with trade exchange, further steps were taken to ship cold storage and medical supplies to Bolivia, and Argentina expressed interest in selling more vehicles, especially pickup trucks and farming technology. Our country also intends to advance negotiations to open and reopen beef, pork and poultry establishments, and industrial processing facilities, to resume meat exports that have been suspended since 2014.

Solá and Mayta Mayta also discussed consular issues and items on the regional agenda, and they commended the joint work done by the Ministries of Health of both nations with regard to the prevention and control of the Coronavirus, in addition to the measures taken in connection with the acquisition of vaccines and diagnostic tests. The Foreign Minister also valued the traditional Bolivian support for Argentina’s position in the sovereignty claim regarding the Malvinas Question.

During the meeting they also dealt with issues on the exchange of tax information, defence cooperation, satellites, and various agreements on human rights and White Helmets cooperation.

After the extended meeting, which Solá attended with the Chief of the Private Office of the Foreign Ministry, Guillermo Justo Chaves; the Secretary for International Economic Relations, Jorge Neme; the Undersecretary for Latin America, Juan Valle; and Argentina’s ambassador designate to La Paz, Ariel Basteiro, both Foreign Ministers signed a Joint Declaration and attended a press conference in which Solá highlighted “the restoration of democracy in Bolivia and the Bolivian people’s merit in putting things back in their place and reinstating the will to have a Government of and for the people.”

Bolivia is one of Argentina’s main suppliers of energy. There has been a deficit in the trade balance between Argentina and Bolivia since 2012, due to natural gas imports. In 2020, Argentine exports to Bolivia reached USD 522 million, mainly focused on milling products, chemical products, cereals, plastics, and mechanical devices.