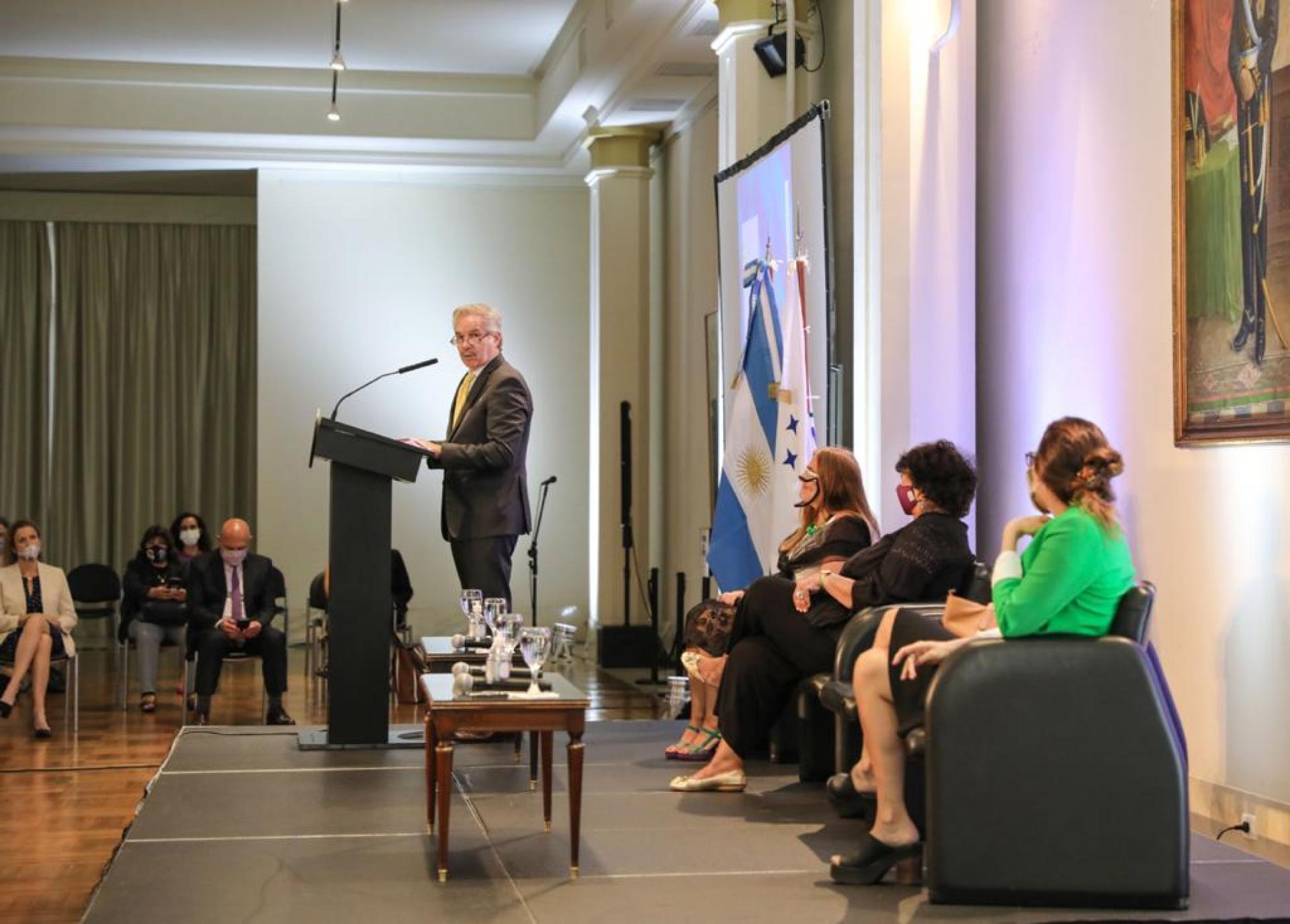 Within the framework of the commemoration of International Women’s Day, Foreign Minister Felipe Solá announced a set of measures contained in a Ministerial Order published in the Official Gazette, which aim to bridge the gender gap in the Ministry of Foreign Affairs, International Trade, and Worship, both in Argentina and in Argentina’s diplomatic missions around the world.

The most important measures are, among others, the creation of a Gender Observatory and the order to all departments of the Ministry, including Argentine embassies and consulates around the world, to implement policies and measures that reduce gender-based unequal opportunities and treatment, as well as to assign tasks to staff without gender-based stereotypes, and to appoint a representative who will be responsible for assisting in the implementation of decisions regarding women’s rights.

During a ceremony held at Palacio San Martín, Solá stated that “a century after the declaration of International Women’s Day, the pay gap is still an item on the agenda because it continues. Nowadays, gender-based violence is still overwhelming and the femicide rate in our region is still increasing, women and members of diversity groups are still afraid of what may happen while walking down the street.”

At the meeting, which was also attended by the Chief of Cabinet of the Ministry of Women, Gender, and Diversity, Lara González Carvajal and the Adviser to the President on Gender Matters, Dora Barrancos, Sola noted that “the big change begins with the word, and with all the people that are here today discussing this topic, reflecting, listening to people like Dora Barrancos, and thinking about all the things those women have done, all of the things we have done as a society, and all the things we still have to do.”

“We carry to all international fora the flag of gender equality and respect for the rights of women and members of diversity groups, both regionally and globally,” he stated.

Accompanied by the Foreign Ministry's Director for Women and Gender Affairs, Ana Sarrabayrouse, Solá highlighted that “last December, the Voluntary Termination of Pregnancy Law was passed along with the passing of the Thousand Days Law. I think it is worth highlighting these laws as both of them are aimed at helping women. The second one helps women to provide for their child if they choose to have him or her.”

He highlighted the achievements of his administration in this regard: “We made changes that, until now, were considered impossible, such as the legalization of the use of rank names in the feminine form, the appointment of women to important positions, the recovery of the Directorate for Women and Gender Affairs. We then set about ensuring higher female representation in Argentine diplomatic missions around the world, regular training as provided for in the Micaela Law, equal promotion, gender mainstreaming in foreign policy, and we are currently working to comply with the trans labor quota within our Ministry.”

Barrancos, thanked Solá and all the teams at the Ministry and said that “this is a change of era; especially in our country, we are in a new phase with strong commitment” to gender matters. “Argentina is one of the countries that has gained the most rights,” she stated.

In addition, González Caravajal stated that “the Ministry of Women, Gender, and Diversity believes that it is very important for each organization to have and advance its own agenda, its own debate frameworks to design gender-based policies. Therefore, the measures announced by the Foreign Minister are very important to us as they reflect the political willingness of President Alberto Fernández and, in this regard, they have our complete support.”