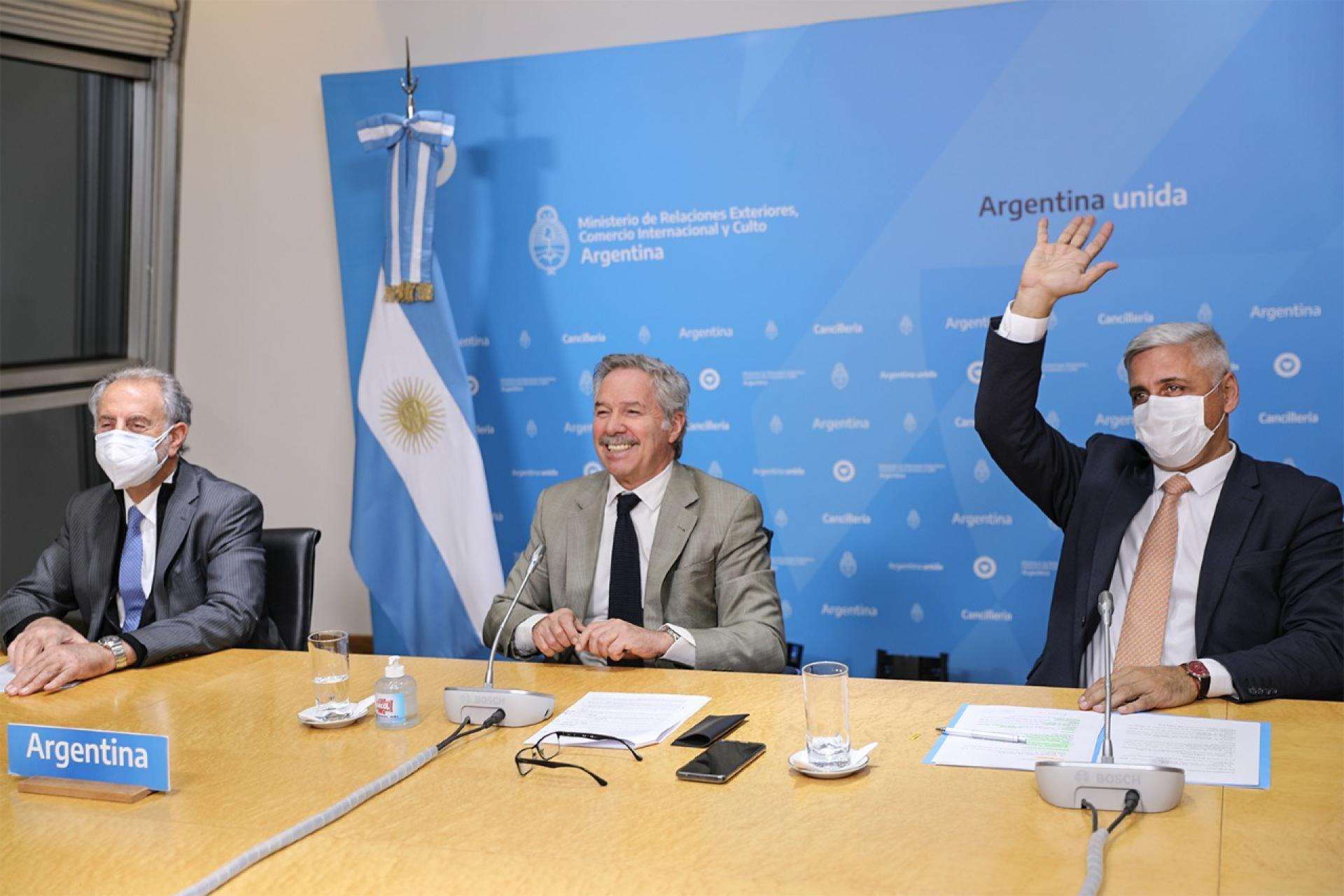 “We are building a Foreign Ministry that, despite the pandemic, has kept close contact with provinces and municipalities for them to have an active and strategic role to promote their markets and products at the global level and attract investments,” stated Solá, highlighting the Ministry’s recovery of its foreign trade portfolio, as instructed by President Alberto Fernández.

Accompanied by the Secretary for International Economic Relations, Jorge Neme, and the Undersecretary for National Affairs, Fernando Asencio, the Foreign Minister referred to the importance of seeking competitiveness and exporting products with the highest value possible in each chain.

“Argentina has always strived to be competitive; sometimes, through the exchange rate, other times, in a more stable and sustainable way, through technological change, i.e. the technology that has especially revolutionized our agricultural sector and, to some extent, other sectors,” he stated, and added: “The existence, staying power and availability of the best Argentine products, which pave the way for others, is the best path towards Argentine foreign trade diversification.”

In addition, Governor Ziliotto, accompanied by the Minister for Production, Fernanda Beatriz González, and by the Chief Executive Director of the I-COMEX La Pampa Agency, Sebastián Lastiri, highlighted the need to position La Pampa’s products in the world and offer the province’s human, productive and natural potential to investors.

Neme for his part stated that: “I know that La Pampa is making a great public investment in the productive system, in productive units to then transfer them to the private sector and to business development. This will foster a much more vibrant business sector.”

“The Foreign Ministry is determined to cooperate to build an exportable offer and attract investments. The Argentine Investment and International Trade Agency (AAICI) has specific portals, like InvestArgentina, to present investment projects and make them visible for investors seeking investment projects in Argentina. On the other hand, we are establishing relations with the investment world so that it can accompany Argentina in the development challenge with some Arab countries, Southeast Asia and Latin American countries. From the investments point of view, there is an interesting scenario for us,” added the Secretary for International Economic Relations.

In closing, Asencio referred to the work that the Undersecretariat for National Affairs is carrying out to enhance relations between local Governments and the Foreign Ministry as well as Argentine embassies around the world.

La Pampa’s Investments and Foreign Trade Agency (I-COMEX La Pampa) is a non-governmental organization comprising La Pampa’s key economy leaders including representatives of the private sector, the provincial private sector, and the La Pampa Bank. It was announced in December 2020 and created in 2021. The Agency is a space for public-private relations that serves as a reference in the province, contributing to its development, and as a gateway for companies that wish to invest in or acquire local products.