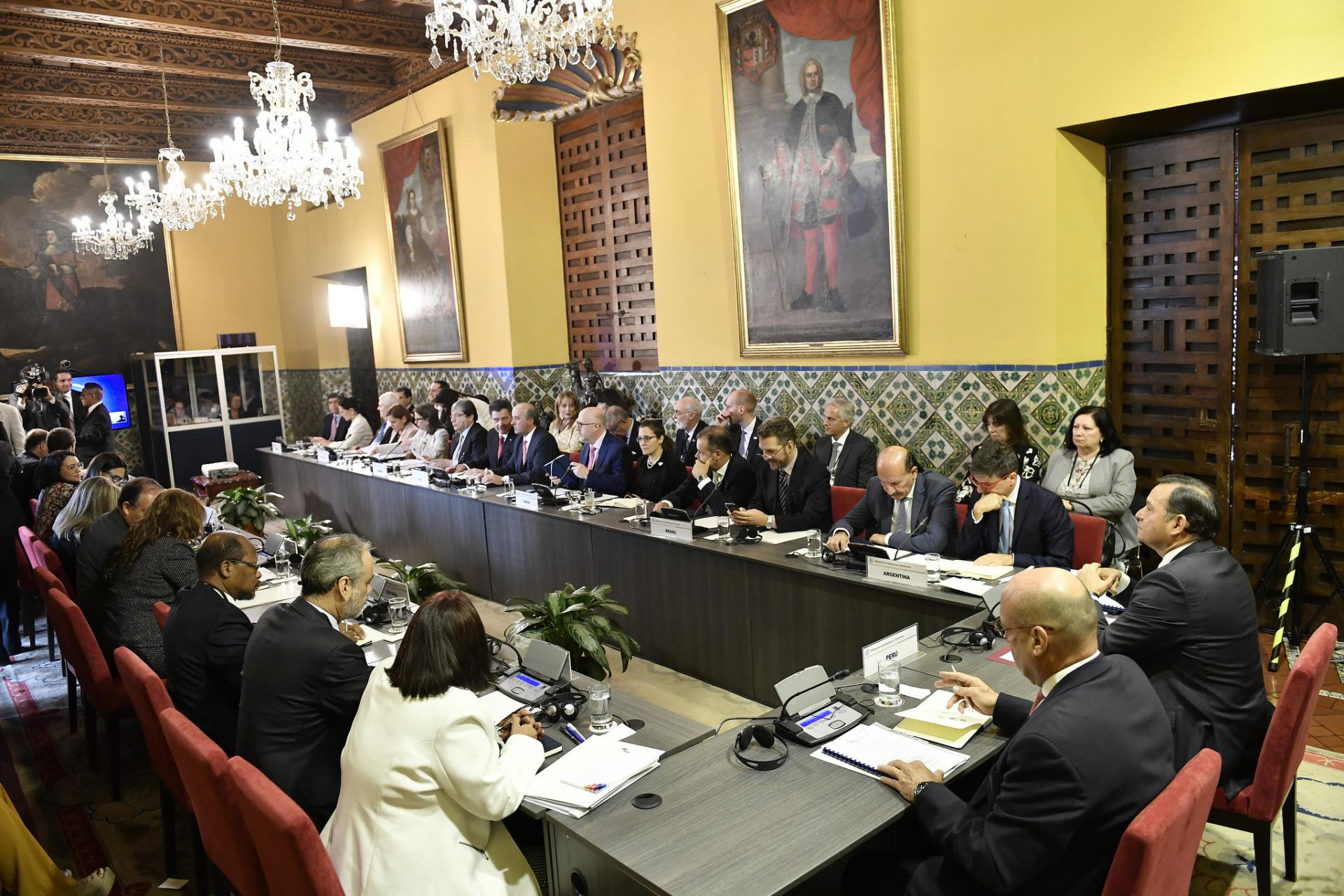 The governments of Argentina, Brazil, Canada, Chile, Colombia, Costa Rica, Guatemala, Honduras, Panama, Paraguay, Peru and Venezuela, in view of the beginning of the decisive stage of the process of democratic restoration and end of usurpation:

1) Reaffirm their full support for the actions undertaken in recent days by the Venezuelan people, under the leadership of Interim President Juan Guaidó, to restore the rule of law in Venezuela peacefully and with full respect for constitutional order, and encourage them to continue those efforts;

2) Strongly condemn all repression by Nicolás Maduro's illegitimate and dictatorial regime, which has once again left many dead and injured; and deplore the appointment as head of the Bolivarian National Intelligence Service (SEBIN) of Gustavo González López, a symbol of the systematic violation of human rights perpetrated by said regime, which adds to the alleged crimes against humanity already submitted to the Prosecutor of the International Criminal Court for consideration;

3) Demand full respect for the life, integrity and freedom of all Venezuelans, of Interim President Juan Guaidó, and of the leaders of  Venezuelan democratic political forces, and the restoration of the political and constitutional rights of Edgar Zambrano, Vice President of the National Assembly, and of all the members of said Assembly, as well as the immediate release of political prisoners.

4) Urge members of the National Armed Forces to remain faithful to their constitutional mandate to serve the Nation, and call on members of the Venezuelan Supreme Tribunal of Justice to stop their complicit support for the illegitimate regime;

5) Agree to propose to the International Contact Group an urgent meeting with representatives from both groups for the purpose of seeking agreement with a view to the common goal of restoring democracy in Venezuela, and invite other members of the international community who are engaged with the issue to join efforts to achieve said goal.

6) Welcome the invitation to the International Conference for Democracy in Venezuela, which will take place in Lima in July and will be attended by all the States in favour of the restoration of democracy in said country.

7) Highlight the importance of the seminar on democratic transitions to be held in Chile next July with the participation of Venezuelan democrat leaders.

8) Urge the international community, the United Nations system and the UN Secretary General to take clear protection measures to mitigate the humanitarian crisis affecting Venezuelans as a result of Nicolás Maduro's illegitimate regime.

9) Urge the international community and the United Nations system to strengthen cooperation with host countries to deal with the mass exodus of Venezuelans;

10) Reiterate their call on Russia, Turkey and all those countries which still support Nicolás Maduro's illegitimate regime to promote Venezuela's democratic transition process.

11) Decide to take the necessary measures to allow Cuba to participate in the search for a solution to the Venezuelan crisis.

12) Decide to cooperate with international mechanisms against corruption, drug trafficking, money laundering, and other crimes, in order to prevent the perpetration of such crimes by members of Nicolás Maduro's illegitimate regime, their family members and front men.

13) Reject the threat posed by the protection granted by Nicolás Maduro's illegitimate regime to terrorist groups which operate within Colombia, and any attempt at destabilizing Colombian institutionalism, attacking the life and integrity of President Ivan Duque, and undermining national security;

14) Decide to remain permanently in session and to hold the next meeting in the city of Guatemala;

15) Encourage the people of Venezuela to continue fighting to restore democracy and acknowledge the courage and patriotism of the Armed Forces that have supported said fight in this decisive stage.