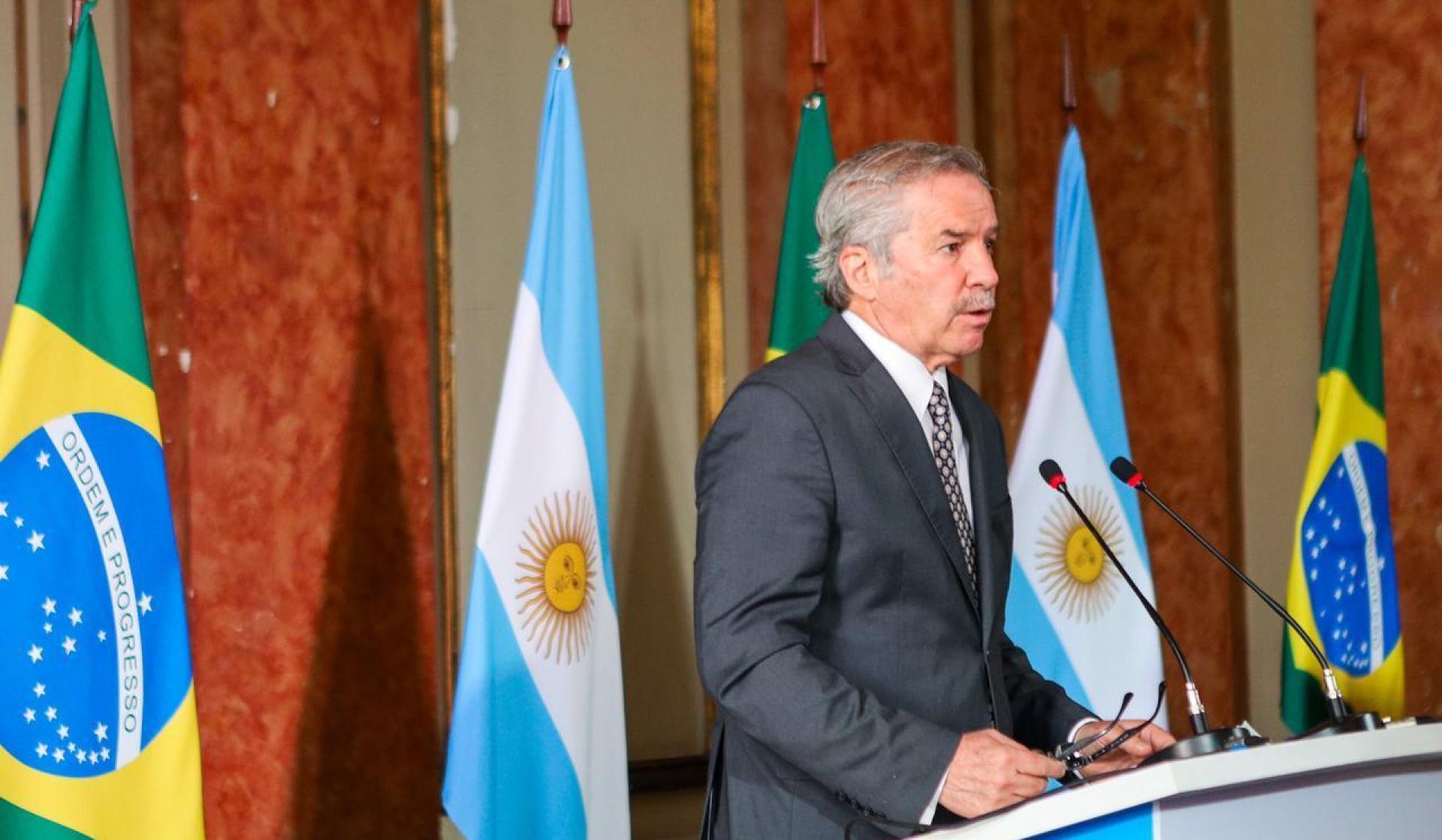 From Brazil, Solá appealed to trust among countries during participation in 30th anniversary of ABACC

“This agency is a model for the world and an enormous responsibility. There were many determining factors in 1991: political decision—which makes possible actions that improve our peoples’ lives—strategic awareness, a future vision, and the most difficult word: trust. We know that trust is key for any statesperson or politician, nothing can be built with mistrust, there can be no growth,” Foreign Minister Felipe Solá stated today during his participation in the ceremony to commemorate the 30th Anniversary of the creation of the Brazilian-Argentine Agency for Accounting and Control of Nuclear Materials (ABACC), the Secretariat of which is headed by Elena Maceiras (Argentina), the first woman to have this role in the Agency, and Marco Marzo (Brazil) as Deputy Secretary.

“The Agency was created on the basis of an unwavering commitment to peace and security: by entering into the Guadalajara Agreement, Argentina and Brazil renounced their right to development, production, acquisition and use of nuclear weapons, ushering in the consolidation of Latin America and the Caribbean as a region of peace and the first nuclear-weapon-free zone in the world,” Solá stated.

He highlighted the “perspective and future vision of the pioneers,” some of which were present in the ceremony, “men and women that started working in the 80s and envisioned a future together, the potential of coming together, what Argentine-Brazilian unity meant after the wary looks during military dictatorships. We are going through difficult times indeed, but so were the times in 1991, economically and politically difficult for both countries. And it was proved then that united we can achieve anything; it is very unlikely for dreams not to come true if we are united. Achieving unity is difficult, but the reward is enormous.”

Referring to the “pride we take in ABACC,” Solá quoted an excerpt addressing unity of Martín Fierro, the quintessential Argentine poem written by Miguel Hernández: “Brothers should stand by each other. Because this is the first law. Keep a true bond between you always.  At every time.  Because if you fight among yourselves. You’ll be devoured by those outside.”

The ceremony was also attended by Ambassador Daniel Scioli, the Consul General in Rio de Janeiro, Claudio Gutiérrez, and the following Brazilian authorities: the Minister of Foreign Affairs, Carlos Alberto França, the Minister of Mines and Energy, Bento Albuquerque, and the Minister of Science, Technology and Innovation, Marcos Pontes, among other officials.

Recorded messages from UN Secretary General Antonio Gutérres (read by the United Nations High Representative for Disarmament Affairs, Izumi Nakamitsu), and the Secretary of the Agency for the Prohibition of Nuclear Weapons in Latin America and the Caribbean (OPANAL), Flávio Roberto Bonzanini, were shown during the event.

The Director General of the International Atomic Energy Agency, Rafael Mariano Grossi, who is from Argentina and is the first Latin American heading the agency, also addressed those present.

The binational agency ABACC was created upon the signing of the Bilateral Agreement between Argentina and Brazil in the City of Guadalajara on 18 July 1991. Its mission is to guarantee to Argentina, Brazil, and the international community that all existing nuclear materials and facilities in Argentina and Brazil are being used exclusively for peaceful purposes.

The existence of ABACC is a clear indication of the political willingness of Argentina and Brazil to provide transparency to their nuclear programs, creating an environment of mutual trust and cooperation for the development of nuclear energy, while also being a tangible and effective contribution towards the non-proliferation and nuclear disarmament international regime, an example of best practices in the field of safeguards.