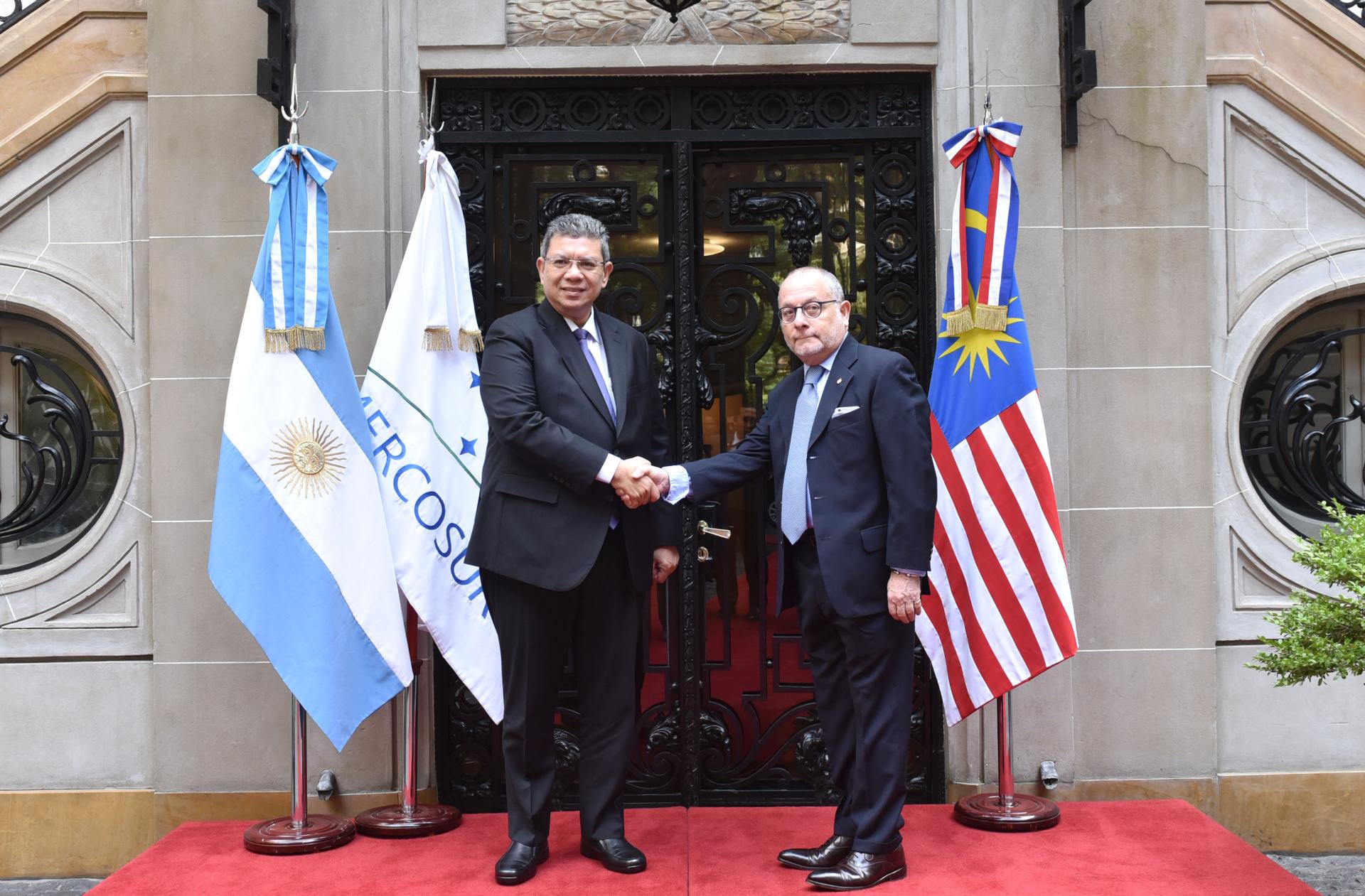 1.            The Foreign Minister of Malaysia, Dato' Saifuddin Abdullah, paid a Working Visit to Argentina on 18-19 March 2019 and will participate in the 2nd High-Level United Nations Conference on South-South Cooperation (BAPA+40), in Buenos Aires.

3.            The Foreign Ministers addressed matters of shared interest on the bilateral, regional and multilateral agendas. They agreed on the excellent state of bilateral relations and expressed their willingness to enhance it, since there is more to be done. They expressed their expectation to conclude pending negotiations on science and technology, agriculture and cooperation in the field of training of diplomats, and to advance negotiations on education and cooperation in the transfer of sentenced persons and the enforcement of sentences.

4.            The Argentine Minister of Foreign Affairs thanked Malaysia for its support for Argentina's accession to the Treaty of Amity and Cooperation in Southeast Asia (TAC), which stresses the shared interest in increased economic and trade relations with the regional organization, as well as the support for Argentina's candidacy to host the International Expo 2023, in Buenos Aires.

5.            The parties noted with great satisfaction that bilateral trade amounted to U$D 1.3 million in 2018 and that there are vast opportunities for its expansion. Argentina reaffirmed its interest in advancing the reopening of Malaysia's beef market, bearing in mind the requirement to comply with the Halal certification. It also ratified its willingness to jointly work on agro-industry matters, especially in the field of Biotechnology.

6.            The parties expressed their satisfaction over the planned investment of U$D 2.3 billion in the next four years by Malaysian oil company PETRONAS and Yacimientos Petrolíferos Fiscales (YPF), from Argentina, for shale oil production in Vaca Muerta, as announced last December.

7.            The parties welcomed the interest of Argentine company IMARTEK in Malaysia, which produces turbines for hydroelectric dams.

9.            As regards bilateral technical cooperation, the Foreign Ministers expressed their enthusiasm for both countries to work closely together through greater cooperation in multiple areas of mutual interest, including agribusiness and forensic science, as well as to strengthen political and economic relations, and relations between their peoples. Foreign Minister Faurie thanked Malaysia for the scholarships awarded in the field of Technical Cooperation.

10.          The Foreign Ministers agreed that, as middle-income democracies with open economies, Argentina and Malaysia shall endeavour to work jointly in international fora on matters of shared interest. They emphasized their commitment to multilateralism and the role of the United Nations in international peacekeeping and security and the promotion of economic and social development. They underscored the importance of a rules-based, open, transparent, inclusive, non-discriminatory and fair multilateral trading system, and recognized the need to adapt the World Trade Organization to present and future challenges.

12.          The Foreign Ministers exchanged Notes on the establishment of a Mechanism of Bilateral Consultations as an instrument for the promotion of the development and strengthening of relations between both countries.