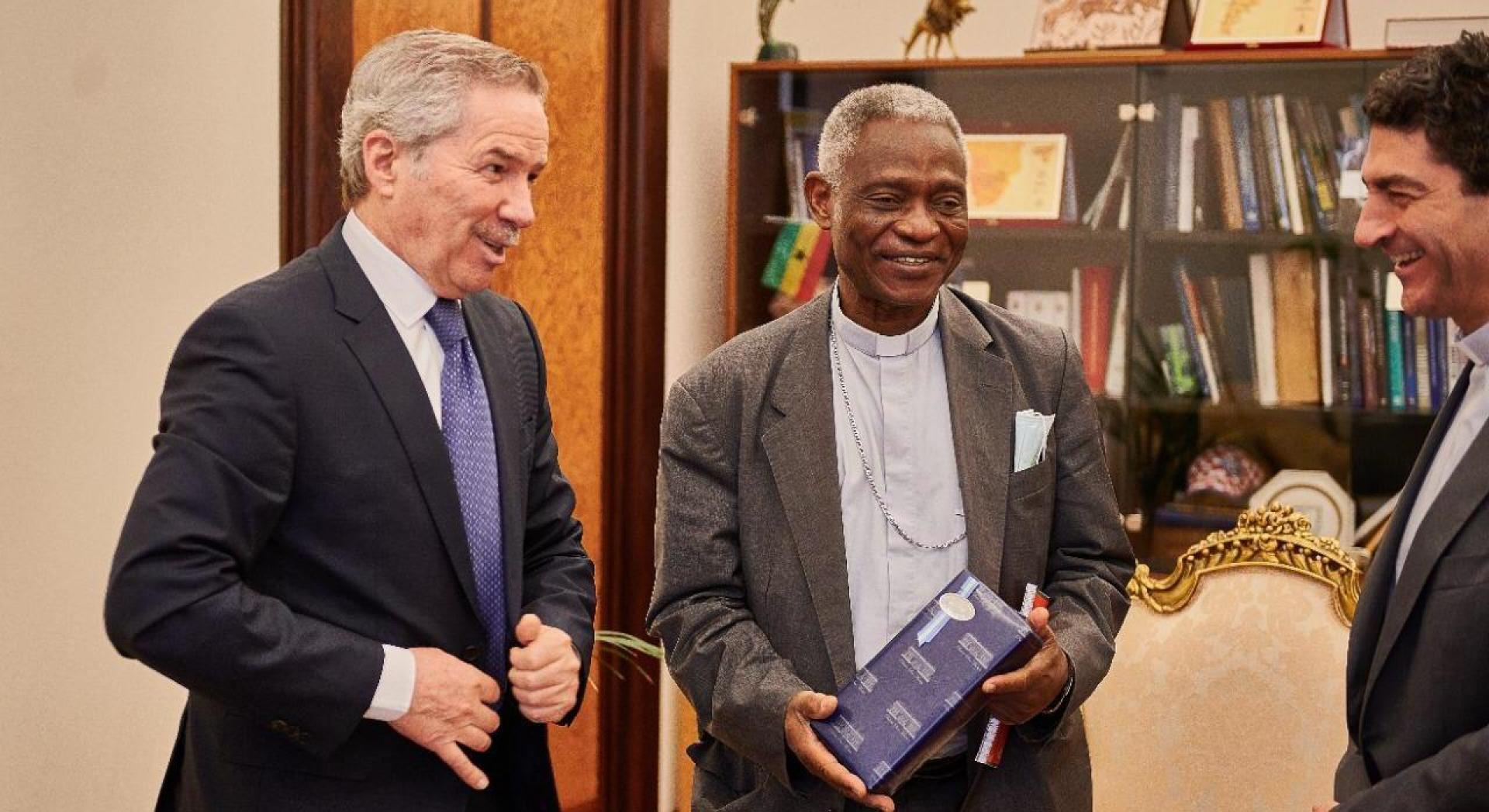 After his participation in the G20 Summit of Foreign Affairs and Development Ministers, and as part of his busy schedule of bilateral meetings, Foreign Minister Felipe Solá arrived this morning in the Vatican, where he held working meetings with the Prefect of the Dicastery for Promoting Integral Human Development, Cardinal Peter K. A. Turkson; the Secretary General of Caritas Internationalis, Aloysius John; and the Grand Chancellor and Minister of Foreign Affairs of the Order of Malta, Albrecht Freiherr von Boeselager.

Solá and Cardinal Turkson met for almost two hours at the Palace of Saint Callixtus, and they agreed on the need to deepen global cooperation to strengthen food systems and food security, by advancing sustainable and equitable policies, and on the contribution Argentina can make to that end. The Minister was joined by the Chief of the Private Office of the Foreign Ministry, Guillermo Justo Chaves, the Ambassador to the Holy See, María Fernanda Silva, and the Secretary General for Foreign Affairs of the Sovereign Order of Malta, Ambassador Stefano Ronca.

Solá provided details of the measures adopted or strengthened by the Argentine government to support citizens during the pandemic, and referred to the Emergency Family Income, the Universal Child Allowance programme and the Alimentar food support card. They also addressed the link between climate change and food production. The Foreign Minister highlighted Pope Francis’ early initiative to create the Vatican COVID-19 Commission in March 2020, headed by Father Augusto Zampini, who also attended the meeting, and they discussed the work carried out by the Commission’s five working groups and its results. They also discussed the path forward to achieve universal and equitable access to vaccines and several issues related to integral human development.

After Pope Francis created the Dicastery in 2016, headed by Turkson, the latter became responsible for several key departments of the Vatican. The Dicastery consolidated the work of four pontifical Councils: Justice and Peace, Pastoral Care for Migrants and Itinerant People, Pastoral Care for Health Care Workers, and Cor Unum.  The Pope entrusted him with the responsibility of dealing with “issues regarding migrants, those in need, the sick, the excluded and marginalized, the imprisoned and the unemployed, as well as victims of armed conflict, natural disasters, and all forms of slavery and torture.”

Solá then met with the Secretary General of Caritas Internationalis, Aloysius John, and thanked him for the work carried out by the institution in Argentina during the pandemic, which helped three million people, not only by providing food and health and medical supplies but also through training. Aloysius John noted that Caritas “is the helping hand of the Church” and that it is carrying out enormous work throughout the world to deal with the COVID pandemic and the climate crisis. The Foreign Minister also referred to the Caritas annual collection that took place 12 and 13 June across Argentina.

Later, during his meeting with the Grand Chancellor and Minister of Foreign Affairs of the Military Order of Malta, Albrecht Freiherr von Boeselager, the Argentine Foreign Minister lauded the work being carried out by the Order, particularly in Argentine informal settlements and low-income neighbourhoods, covering expenses for educational and sports infrastructure and cooperating with food distribution.

Founded in the 11th century in Jerusalem, the Order of Malta is the oldest lay order of the Roman Catholic Church; its central government is located in Rome, it is a sovereign order and it holds relations with over 110 States. It is present in 120 countries through its medical, social and humanitarian projects, and operates through 11 Priories, 48 national Associations, 133 diplomatic missions, 1 worldwide relief agency and 33 national volunteer corps. It does not pursue any economic or political goal and does not depend on any other State or government.

In all of his meetings, Minister Solá reviewed the key topics of the recent G20 Summit of Foreign Affairs and Development Ministers and highlighted the vaccination plan that is being carried out by the Argentine government, which according to data of the Public Vaccination Monitor—the online register tracking in real time the immunization programme throughout the Argentine territory—up until this morning, 24,944,091 vaccines have been distributed among all provinces, 20,907,721 of which have already been administered: 16,821,968 people received the first dose and 4,085,753 completed the full vaccination regimen.